Spacious, refined and packed with tech: here are all the reasons why our What Car? team think the all-electric Volkswagen ID. Buzz is the best car you can buy in 2023...

For 45 years, the What Car? Awards have recognised the very best that the car industry has to offer. To win any category is an enormous achievement, but to take home the overall What Car? Car of the Year title is the highest accolade any manufacturer could hope for. And this year, that trophy goes to the Volkswagen ID. Buzz.

Offering an enormous boot, a hugely practical interior, great ride and handling, superb resale values and brilliant driver assistance safety systems – along with a range of up to 258 miles of range (WLTP) and rapid charging from 10-80% in as little as 30 minutes – this all-electric people carrier combines the practicality of an MPV with the comfort and refinement of a luxury SUV.

As What Car? Editor Steve Huntingford explains: “The Volkswagen ID. Buzz is a car you can buy with your head and your heart. In short, it moves the game on more than any other model launched in the past 12 months, so it has to be our What Car Car of the Year.”

But how exactly did our editors come to this conclusion? Here are five key reasons why. 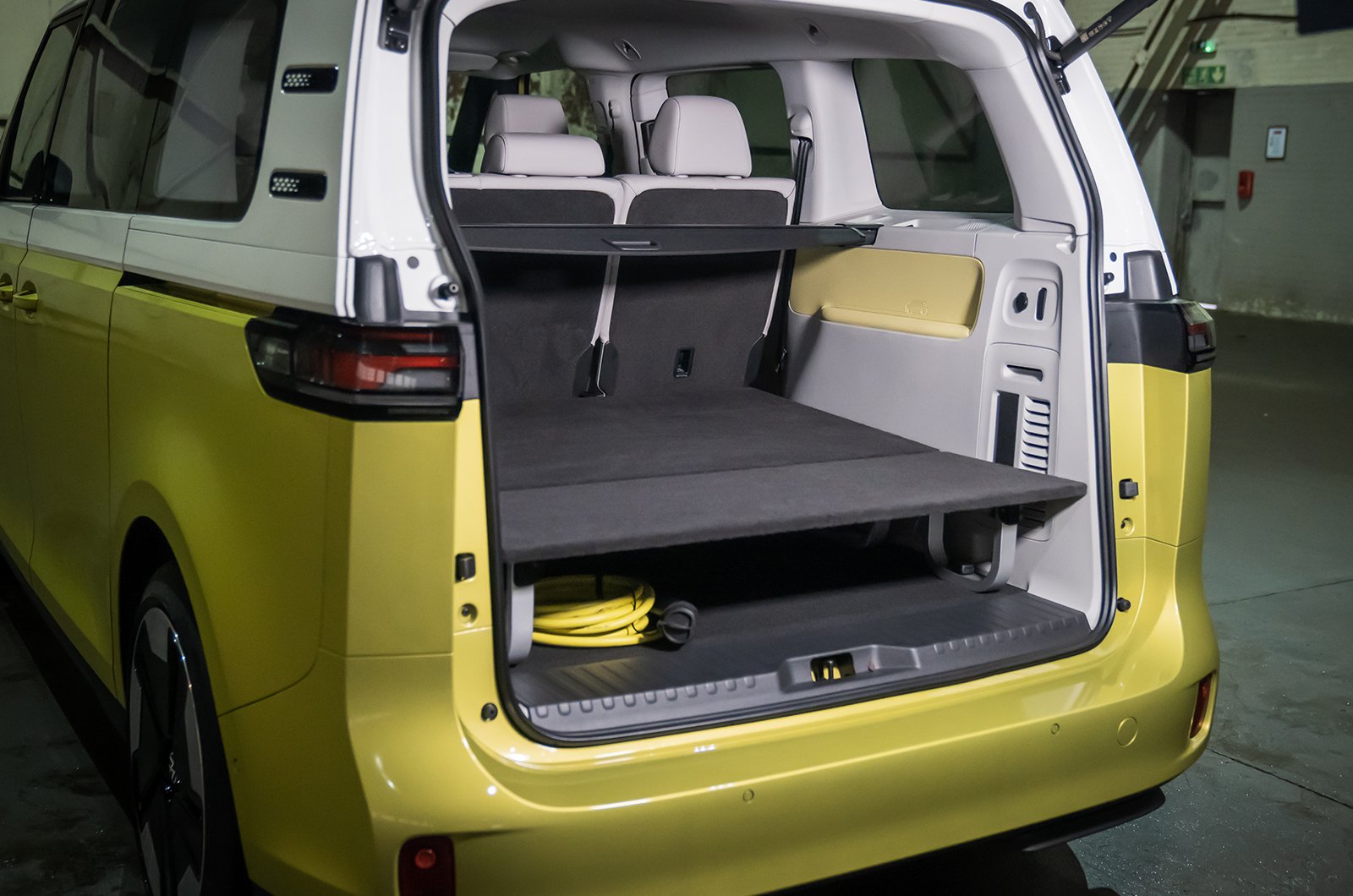 The Volkswagen ID. Buzz is the ultimate family vehicle. Its all-electric underpinnings have given Volksagen’s expert engineers the scope to squeeze out every ounce of usable space in the boot. With the seats up, the ID. Buzz offers a whopping 1121 litres of luggage space. Opt for our recommended Style trim and you’ll even get a nifty shelf that partitions the vast area, meaning you can store smaller items – like a charging cable – underneath the main storage space.

Fold down the 60:40 split rear seats and the ID. Buzz boasts a cave-like 2205 litres of luggage space. As What Car? Deputy Editor Darren Moss describes the ID. Buzz’s vastness: “Given the shape of the ID. Buzz, it’ll come as little surprise to you that it’s capable of swallowing just about anything you might wish to take with you on your journey. But it’s the scale of that space which will cause your jaw to drop to the floor.

“The boot is far, far larger than anything you’d see in an SUV, and in our tests managed to hold an incredible 16 carry-on suitcases below its load cover – meaning nobody you’re travelling with needs to pack light.” 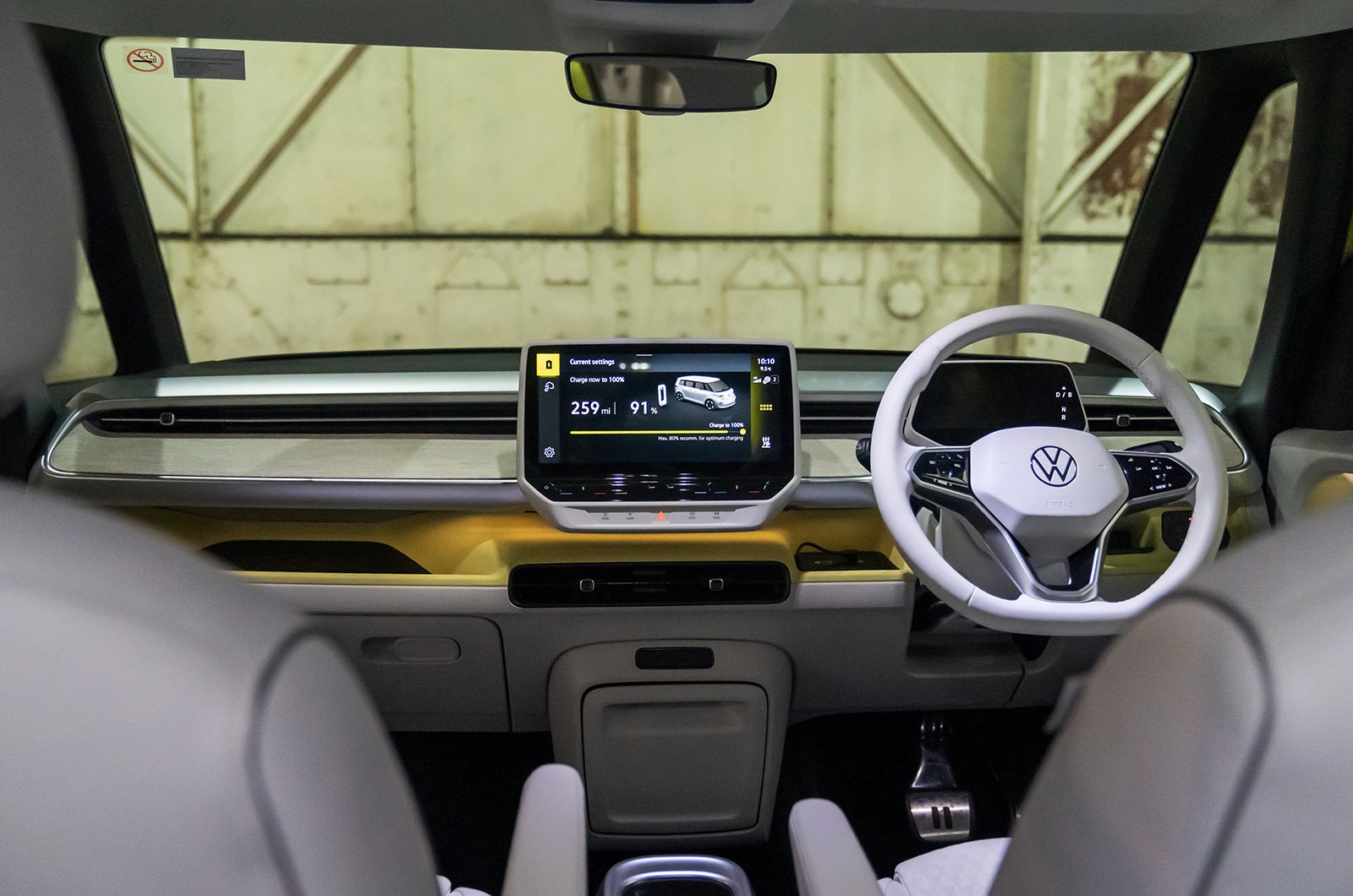 And it’s not just the Volkswagen ID. Buzz’s boot that’s extremely practical. Inside, there’s plenty of space for five adults to travel in total comfort, while handy picnic tables on the backs of the front seats act as the perfect surface for a bite to eat or to rest a device and watch a movie.

There are other handy features dotted around, too. USB-C ports keep everyone’s devices topped-up, and nifty padded pockets above the picnic tables are designed to keep your smartphone safe. Large windows give a vibrant and airy atmosphere, while the front seats have independent armrests to help take the stress out of those longer journeys.

Up-front, the innovative Buzz Box is a detachable centre console that houses cup holders and an ice-scraper – as well as anything else you’d like to put in there, while the minimalist dashboard and optional 12in Discover Pro infotainment gives a premium feel.

On the road, our editors highlighted the Volkswagen ID. Buzz’s hushed driving experience: “Its refinement is surprisingly good, with a little wind or road noise reaching the inside of the car, even at motorway speeds, they said.”

What Car? Video Reviews Editor Doug Revolta had particular praise for the ID. Buzz’s interior: “In terms of practicality, the ID. Buzz is incredibly tough to beat, and that’s not just because of its boot. The rear seat space is properly vast, with loads of head room and leg room, and there’s lots of helpful touches as well like USB-C chargers in the back, picnic tables, and sliding rear doors which make it very easy to get in and out. There’s even a seven-seat version of the ID. Buzz on the way as well.

“While not not technically a van, it’s certainly as practical as one. And if you’re comparing this to an alternative large electric car, or even an electric SUV, this soundly beats them all.” 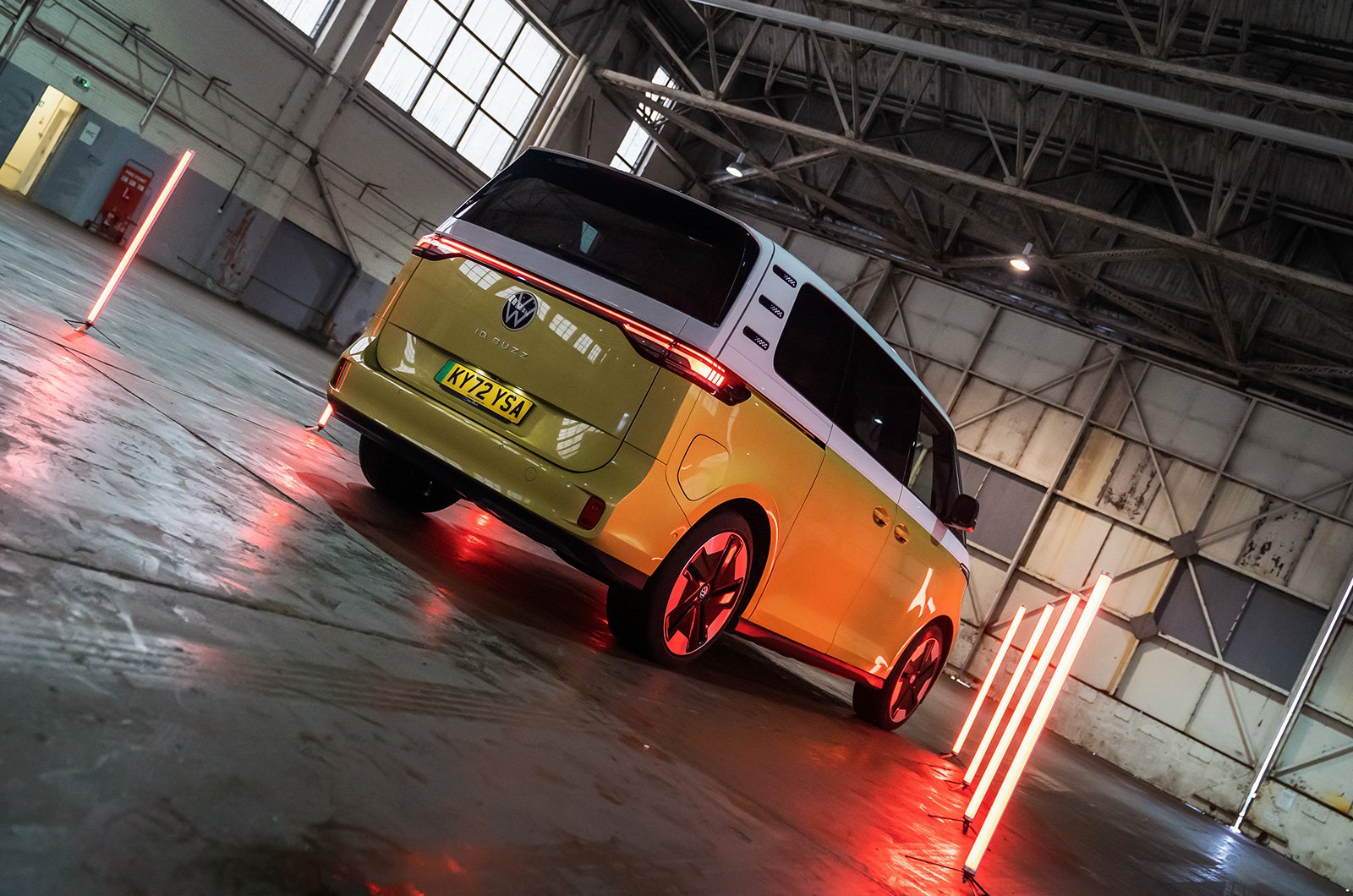 Out on the road, the Volkswagen ID. Buzz’s efficient all-electric motor works with a 77kWh lithium-ion battery to produce 204PS and 310Nm of instant electric torque – perfect for zipping through traffic, getting up to motorway speeds or hauling luggage on a family weekend away.

And despite its large stature and vast practicality, the Volkswagen ID. Buzz handles incredibly well thanks to low-slung batteries and an advanced multi-link suspension set up at the rear, while finely-tuned dampers help take the thump out of potholes around town.

“Because the heavy battery is positioned low down, beneath the floor, the ID. Buzz is far more stable than you’d think for a tall vehicle, handling more like a premium-badged SUV than a similar-sized MPV,” said our road testers. “The steering is accurate and nicely weighted, letting you confidently place the ID. Buzz in corners, and the ride is very reminiscent of the Audi Q4 e-tron’s in the way it takes the sting out of bumps around town, while also feeling very settled on faster roads.”

As What Car? Deputy Editor Darren Moss adds: “While you might be wincing at the thought of threading the ID. Buzz along a tight city street, it actually couldn’t be easier, thanks to a turning circle that’s smaller than those of some far smaller SUVs.” 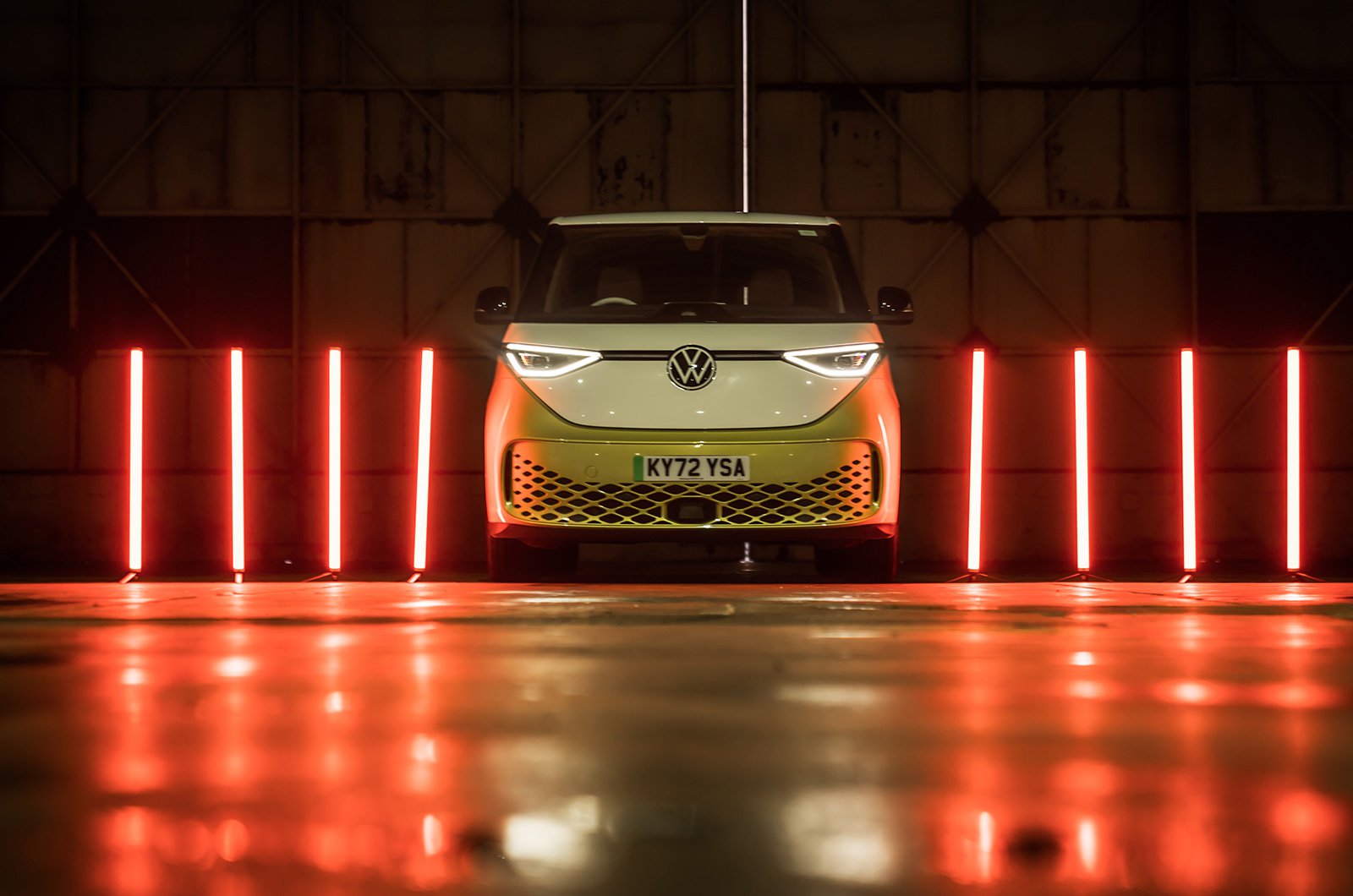 With its wrap-around windscreen, large ‘VW’ badge, two-tone paintwork (Style trim), rounded edges and full-width LED lights front and rear, the Volkswagen ID. Buzz is truly a predecessor to the classic Type 2 Microbus, but reimagined for the all-electric age. But what does all this head-turning style mean? Well, the Volkswagen ID. Buzz is expected to be hugely desirable, which will have a positive impact on both resale values and PCP finance rates.

As What Car? Video Test Editor Doug Revolta explains: “The ID. Buzz is not a cheap car to buy, but that isn’t the whole story when you look at the financial implications of owning this electric car. For example, because this is a hugely desirable car it is predicted to hold onto its value significantly better than all of its rivals. Which also means monthly PCP finance deals are very competitively priced.”

And it’s not just about residual values. The ID. Buzz’s all-electric powertrain offers cost-effective motoring when you’re able to charge at home: “On top of that, being an electric car there are other potential savings in ownership costs available to you compared with a fuel-powered car,” we said. “If you can regularly charge up the ID. Buzz at home, then you’ll pay a lot less for electricity than you would for fuel.” 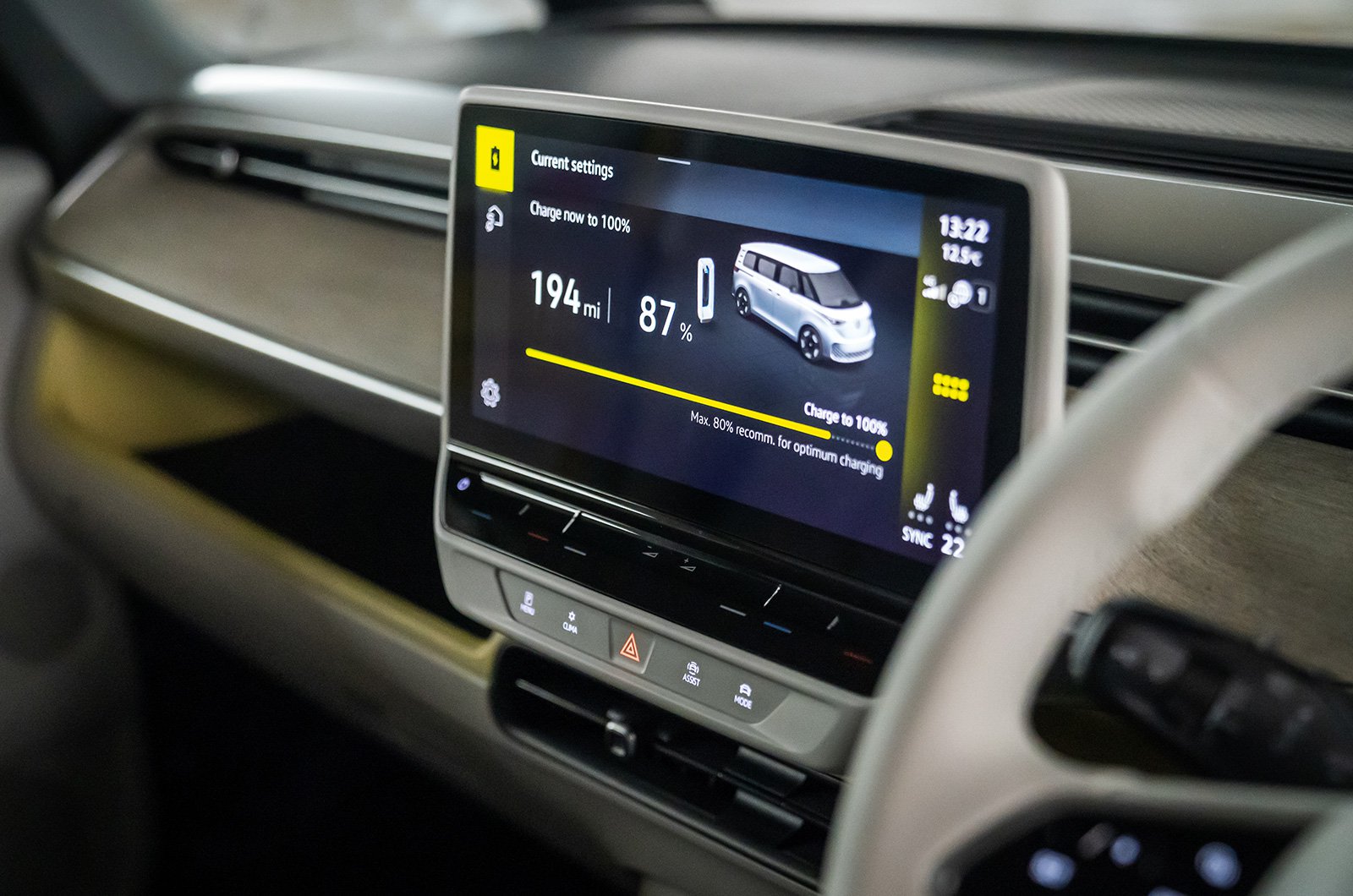 Last, but certainly not least, we come to the Volkswagen ID. Buzz’s superb safety credentials. On the road, the ID. Buzz supports the latest ID. 3.2 software that offers 30 different driver assistance systems that help keep you and your passengers safe. These include: Car2X (which allows the ID. Buzz to receive real-time traffic information), Front Assist with pedestrian and cyclist monitoring, PreCrash occupant protection, and Dynamic Road Sign Display and Lane Assist.

Available as options are the two newest systems: Travel Assist with swarm data utilisation and assisted lane changing, and Park Assist Plus with memory function for up to five automated parking manoeuvres. All of this technology counts towards a five-star Euro NCAP safety rating.

“The ID. Buzz is a car you’re likely to put your family in, so it’s reassuring that it scored excellent marks when it was appraised by safety body Euro NCAP,” said What Car? Deputy Editor Darren Moss. “It fared particularly well for child crash protection, but was also praised for its protection of adults sitting in both the front and the rear.

“To help you avoid having an accident in the first place, all versions come with automatic emergency braking (featuring pedestrian and cyclist protection), lane-keeping assistance and road sign recognition.”

So, those are just five reasons why the Volkswagen ID. Buzz is our 2023 Car of the Year.