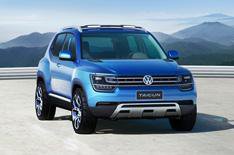 This is the Volkswagen Taigun, an SUV concept car that has been unveiled at the 2012 Sao Paulo motor show in Brazil.

The Taigun concept car is a compact SUV based on the same platform as the VW Up. It has the same wheelbase as a VW Polo, but is 11cm shorter, 5cm wider and 11cm taller.

A production version is likely, and Volkswagen says it would be sold 'around the world'. In the UK, the Taigun would be a rival for cars such as the Nissan Juke, Skoda Yeti and Vauxhall Mokka. Depending on how cheaply it can be produced, it would also be a potential rival for the Dacia Duster and Fiat Panda 4x4.

The four-seat concept car has a new 109bhp 1.0-litre TSI petrol engine. It's a turbocharged three-cylinder unit that's related to the engines available in the VW Up. The same engine is likely to be used for the forthcoming Up GT a hot hatchback version of the Up city car.

Concept car has a split tailgate; production model is likely to have a conventional hatchback

Although the Taigun's styling has hints of VW's larger Tiguan and Touareg SUVs, it also shows the influence of Volkswagen's Cross Coupe concept car, which made its debut at the 2011 Tokyo motor show. VW designers have said the Cross Coupe will influence the look of all VW's forthcoming SUV models.

Some of the Taigun concept car's features aren't likely to make production. Volkswagen's development chief Ulrich Hackenberg told us that the split tailgate is 'not very realistic' and that a production car is likely to have a conventional hatchback.

The Taigun's interior colour scheme which uses lots of white, yellow and bright blue is expected to be toned down, too, although the overall architecture could remain unchanged.

VW Taigun concept car is shorter than a Polo, but wider and taller

Volkswagen has yet to reveal when a production version of the Taigun is due, but Hackenburg hinted that it could potentially get the new model to market in around two years, so it's not likely to reach showrooms until late 2014 or early 2015.

Headlights and front grille are influenced by the Cross Coupe concept car; future VW SUVs will have a similar look

The Taigun would be a rival for cars such as the Nissan Juke, Skoda Yeti and Vauxhall Mokka

Four-seater cabin; boot capacity is 280 litres with the seats up

Concept car has a split tailgate