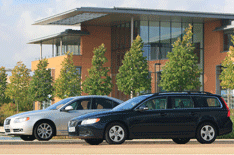 Volvo's S80 and V70 DRIVe models have been further tweaked to give class-leading CO2 emissions of under 120g/km.

The 109bhp 1.6-litre turbodiesel's fuel economy has been extended by 5.1mpg to produce an average of 62.8mpg increasing both cars' range to over 1100 miles.

Intelligent technology
Extra tweaks to Volvo's DRIVe technology have helped provide the increased efficiency. These include intelligent battery charging which allows the alternator to charge the battery only at times of low load, such as driving downhill along with a low-friction belt to drive the alternator and air-conditioning system.

Stephen Odell, Volvo's CEO and cars president, said: 'Now that we have brought two of the larger models in below the magical 120 g/km limit, few of our competitors can now match us when it comes to offering customers an extensive range of low emission cars.'

There's more good news with the annual road tax, too. Both the S80 and V70 fall into Vehicle Excise Band C, so will cost just 35 per year.