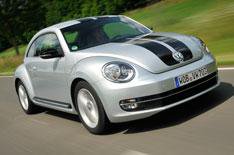 What is it?
Volkswagen has reinvented the Beetleagain.

This all-new model replaces the car that started the whole retro craze back in 1998, and this time its sleeker, sportier and a good deal more practical. Its also longer, wider and lower than the current model.

Whats it like to drive?
This new Beetle one shares many of its oily bits with the mighty Golf GTI, so its much sportier to drive than its predecessor.

So far weve only tested the top-of-the range 197bhp turbocharged 2.0-litre petrol model with optional six-speed DSG semi-automatic gearbox. Theres plenty of urgency from the engine and the box is super-quick through the gears and generally smooth. Low speed manoeuvres can be jerky, though.

Pull away briskly and the front tyres are surprisingly quick to give up traction, although theres plenty of cornering grip. The Beetles body stays impressively flat through corners, too. Its a shame the steering isnt better; its light, so is well suited to town driving, but could be sharper for when youre pushing on.

The ride has a firm edge to it at low speeds, too, but its well controlled when you pick up the pace. Lesser Beetles will be fitted a simpler suspension system, and it remains to be seen how this will affect things.

The new Beetle is generally refined, other than a fair bit of wind noise generated by the frameless doors; engine and road noise are particularly well suppressed.

Whats it like inside?
The new Beetles dash has been inspired by the originals. That means its taller than in most modern cars, and has a squared-off front. You can go even further with the retro vibe and have the dash painted the same colour as the car.

On the whole, the interior looks fresh and smart, but some of the trim does feel surprisingly cheap. Theres no a soft-touch dashboard like youll find in a Golf, for example, and the plastics on the centre console and around the front centre armrest are disappointingly hard and scratchy. At least most of the switches and controls feel reassuringly weighty.

Better news is that the new Beetle is much more practical than the existing one. Its larger dimensions have obviously given the designers room to play with, and that space has been used in a more thoughtful way. The roof has been flattened out, for example, which means headroom is shared more evenly between front and rear passengers. There are still only four seats, but the two in the rear are now suitable for adults as well as small kids although if youre over 5ft 5 you wont fancy spending long in the back.

Youll be able to carry more than just a couple of bags of shopping now, too, because the new Beetle has a third more boot space 310 litres of space up from 209 litres.

Exact specifications and prices have yet to be confirmed, although we do know that the entry-level 1.2 TSI model will start at roughly 15,200. That looks good value when you consider that an equivalent Golf costs around 1300 more.

True, the Beetle isnt as practical, as good to drive or as classily finished as its more sensible sibling, but its still a decent car. Factor in its undeniable charm and many will be prepared to put up with a few shortcomings.
Range-topping models wont be so keenly priced, though. Expect this 2.0 TSI model to cost between 23k and 25k, which is roughly the same as VWs more powerful Scirocco coup and Golf GTI.

Take a closer look
Get closer to the VW Beetle by having an closer look at its dashboard. Simply click on the icon in the bottom right corner of the photo below, then move your cursor around the photo for a closer look. The icon may take a few moments to load.