What the papers say: December 31

* What's in the papers? * We review broadsheets and tabloids * Updated every morning... 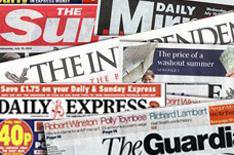 GMAC's rescue
The Times also reports on the US Treasury's decision to throw a 4.2billion lifeline to GMAC, General Motors' finance unit. The paper says it could be enough to halt the slump in the US car industry. GMAC said it will ease lending restrictions to car buyers.
The Times

Petrol at three-year low
We've never had it so good - well, not in the past three years anyway. The Financial Times says the average price of a litre of petrol has fallen to its lowest point in three years. The average price of petrol is 87.9p a litre, compared with 88.27p in December 2005. The paper says the average family now spends 67.39 less a month on fuel than it did in the summer when petrol was at an all-time high of 119.7p.
The Financial Times

U-turn for Mr Loophole?
In an interview for the Independent, lawyer Nick Freeman - nicknamed Mr Loophole after getting a string of celebs off the hook in driving cases - says he's willing to work with the government to help iron out the loopholes that has made him famous. He said: 'I wouldn't say I know the law better than the Government but I would be very happy to offer whatever help I can to try to make our roads safer.'
The Independent