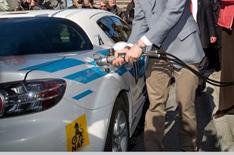 HyNor is a project that has established a link of refuelling stations along motorways running around the southern tip of Norway, between the capital Oslo and the port of Stavanger.

There are seven refuelling points along the so-called Hydrogen Highway, which was officially opened in May this year.

The hydrogen is produced in a variety of ways, from waste wood or biomass to electrolysis. Although the hydrogen is extremely expensive to manufacture, transport and store at the refuelling points, the project is subsidising the cost and offering it for sale at the same price as petrol.

HyNor is run and funded by a consortium of interested bodies, including public authorities, industry and academic institutions.