More for you |
Promoted | 5 reasons why it makes sense to go electric todayBig savings on our Car of the Year Awards winnersWhat Car? Awards 2021: The best cars you can buy2021 Nissan Qashqai: electric and hybrid power revealedCar of the Year 2021
Home
News
World's largest Audi centre opens
news 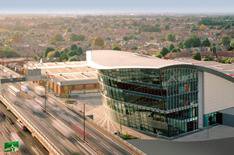 The world's largest Audi car showroom will opened in London on Monday, October 19.

Located next to the M4, Audi West London has three showroom floors, making it possible for drivers on the motorway to see displays inside the centre.

The dealership has space for 116 cars, a 32-car workshop in the basement and a two-storey exhibitions and conference centre.

Innovative design
Designed by Wilkinson Eyre, the same company that created the Millennium Bridge in Gateshead, the architecture of Audi's new centre takes inspiration from themes including the manta ray fish and the wings of a B2 stealth bomber.

The one-tonne aluminium sculpture that dominated Audi's display at this year's Goodwood Festival of Speed is suspended in a purpose-built atrium within the centre.

The showroom cost 45 million to build and up to 30,000 customers a year are expected to use it.

Audi estimates that it will sell around 700 cars from its new London showroom in the next 12 months.

Celebs at the launch
Audi celebrated the opening of its largest centre with a star-studded party, including guests from the world of sport, television and film.