The best time of the month to buy a new car

Head to the dealership on the right day of the month and you could bag a better deal...

The time of the month that you buy a car could have a significant impact on the price you’ll pay.

It sounds unusual, but the price at which dealers advertise cars is subject to change and open to negotiation – and both can go up or down within the month, so here’s how time your purchase to bag a bargain.

Why timing is important

Most dealerships have to meet sales targets, and will need to shift a certain amount of cars by the end of a set period. Whether or not they’re close to meeting those targets – and the associated bonuses for sales staff – will affect the availability of offers and the salesman’s willingness to give you a discount.

Time it right, and you’ll likely walk away with a great deal. Pick the wrong day and you could pay over the odds.

The majority of dealerships work to quarterly sales targets, which usually fall at the end of March, June, September and December.

As a result, they won’t be too worried about those targets during the succeeding months, so January, April, July and October are best avoided.

The very beginning of the month isn’t a great time to go car shopping. Not only may you have just missed a quarter, but also a lot of people get paid at the end of the month, which means dealers will likely be busier at these times and therefore less interested in offering discounts.

Similarly, the last few days the month – even the end of one of the aforementioned quarters – also may not be the best time to hit the showroom. If a dealership has already met its targets for that particular period (and many attempt to hit them early) then there’s no incentive for them to make a deal.

The best time to go car shopping is towards the end of one of the key sales quarters, but around the middle of the corresponding month – maybe even a few days later. The 15th of the month is a good time to start, but don’t leave it any later than the 25th.

Bear in mind that this should be when you finalise the purchase, and it’s a good idea to take your time and test drive a few different models before you commit to buying a car – so do that first, at your leisure, before you return to seal the deal. 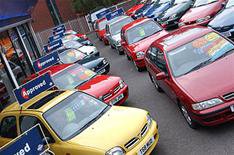 Number plates change in March and September, and these are usually the busiest months for new car sales. If you’re buying a new car, then it may be best to avoid these months – even though they fall at the end of two of the key quarters, which means June and December are the best months to buy new.

Also, a lot of people visit dealers at the weekend and, the busier the showroom, the less likely you are to get a salesman’s undivided attention. If you can, go during the week when it’s quieter.

Whatever time of the month or year you’re buying, visit What Car?’s new car deals section first. Our Target Price is the most we think we think you should pay for a new car and is set by our team of mystery shoppers, but by signing up you could save even more. You can also check out thousands of new car deals online and find a local dealer with great offers.

Next: what is the difference between APR and flat rate car finance? >