Let’s start with what’s good, shall we? The Quadrifoglio truly feels like a step above the regular Stelvio in terms of interior quality. It has a leather-wrapped dashboard, glossy carbonfibre trim is splashed throughout the interior, and there’s a pair of beautifully crafted aluminium shift paddles that look like they’ve been lifted straight out of a Ferrari F8 Tributo.

The driving position is as good as you’d want in a car with this much performance. So far, we’ve only tried cars with the Sparco Carbon Shell sports seats. They’re an admittedly expensive option, but they look absolutely fantastic, offer loads of support and allow you to sit down nice and low behind the slim-rimmed steering wheel and well-positioned pedals. Just, remember that the only electric adjustment you get on them is for height.

On top of that, a facelift in 2020 brought a higher-quality flat-bottomed steering wheel and a matching leather wrapped gear selector with an Italian flag motif at its base. Best of all, though, certain ergonomic and quality quibbles that blighted earlier Stelvios were addressed. For example, the rotary infotainment controller, which used to feel a little loose, now has a solid click to it, while the cup holders are now located further back from the dashboard, allowing for a larger size of bottle.

That said, even in its latest, improved form, if you compare the Stelvio Quadrifoglio with other similarly priced Sports SUVs rather than against cheaper versions of itself, it falls down somewhat. Put simply, some of the materials used for parts like the air conditioning controls and drive mode selector wouldn't look out of place in an entry-level family hatchback, while none of the switches operate with the pleasing precision of those found in the Porsche Macan and Audi SQ5.

The infotainment system was also treated to an overhaul in 2020, enabling it to be controlled either by touching the 8.8in screen or by using the rotary controller located on the centre console. Not only does this make inputting destinations easier when you’re at a standstill (although we generally find touchscreens quite distracting to use while driving), but you can also use the touchscreen to easily drag and drop widgets such as your sat-nav or radio, to create a fully customisable homepage.

It’s certainly more intuitive than the system in earlier Stelvios, but it’s a shame that its graphics look rather mediocre, the display is a bit dim and muddy, and that it’s simply not as snappy to use as the iDrive system of the BMW X3 M Competition. More positively, it features Apple CarPlay and Android Auto smartphone mirroring as standard, and we like its ‘Performance Pages’ feature, which shows things like turbo pressure, power output, a track timer and the temperatures of the main mechanical components in real time; the latter are especially important if you ever take the Quadrifoglio onto a track. 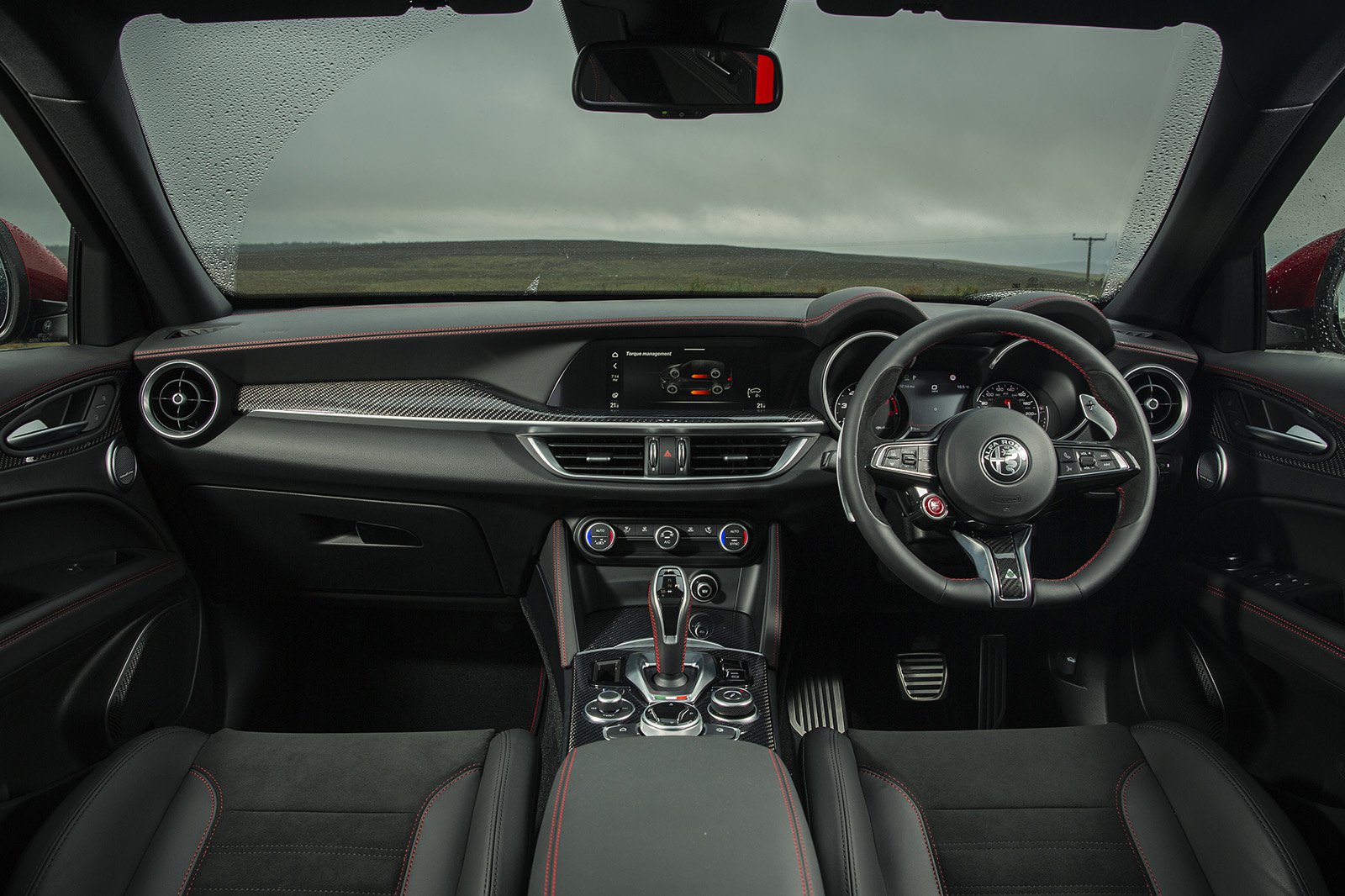 Awesome performance and surefooted handling, yet easy and...