We’d avoid the entry-level diesel, which is the 134bhp 30 TDI, because it's a little sluggish, as demonstrated by its 0-62mph time of 9.8sec. Instead, move up to the 161bhp 35 TDI, which is our pick of the entire range. It has plenty of low-down punch so you can tootle around town effortlessly, as well as enough outright pace to whisk you up to motorway speeds effectively (0-62mph takes a very respectable 8.5sec). Then there's the 201bhp 40 TDI, which manages even easier B-road overtakes, although we’d argue that it’s not worth the additional costs.

What about the petrols? Well, the 148bhp 35 TFSI needs to be worked fairly hard to build speed in a hurry. That's why we prefer the 201bhp 40 TFSI, which is the best option if you don't want a diesel. It provides a considerable performance boost over the 35 TFSI and works really well in every situation (0-62mph takes 7.3sec – about the same as the BMW 320i Touring) without pushing up the running costs too much. There’s also the 261bhp 45 TFSI, which is jolly brisk (0-62mph takes 5.7sec). If that’s not fast enough, we’d point you towards the even quicker Audi S4 or the downright rapid RS4.

Most Audi A4 Avant engines come with a seven-speed S tronic dual-clutch automatic gearbox, which can be a little slow on the uptake after you've kicked it down, but pings through each gear change quickly once you're accelerating. The four-wheel-drive quattro models are able to launch out of a T-junction without spinning a wheel, even in greasy conditions.

The Audi A4 Avant comes with three suspension options, depending on which trim level you go for, but the general rule of thumb is it's a more comfortable car than the equivalent BMW 3 Series Touring. Technik and Sport Edition trim have our favourite Comfort Dynamic setup. That puts comfort first, unsurprisingly, especially if you stick with the default 17in or 18in alloy wheels. It deals very effectively with all manner of lumps and bumps, yet still controls body movements extremely well over dips and crests. It pays to remember that larger wheels tend to make the ride harsher, though.

The pricier S line and Black Edition come with Sport suspension as standard. It's a stiffer, lower set-up that sharpens the handling (see below) but at the expense of comfort, introducing a little extra bumpiness at low speeds. It's far from a deal-breaker, but we'd suggest sticking with the Comfort Dynamic set-up if you can.

Finally, there's the Adaptive Sport suspension for the best of both worlds. It twins the lower and stiffer settings of the Sport suspension with a softer, selectable Comfort mode, so you have the choice of a smoother ride if you want. The trouble is it's available only with the top-spec Vorsprung trim. 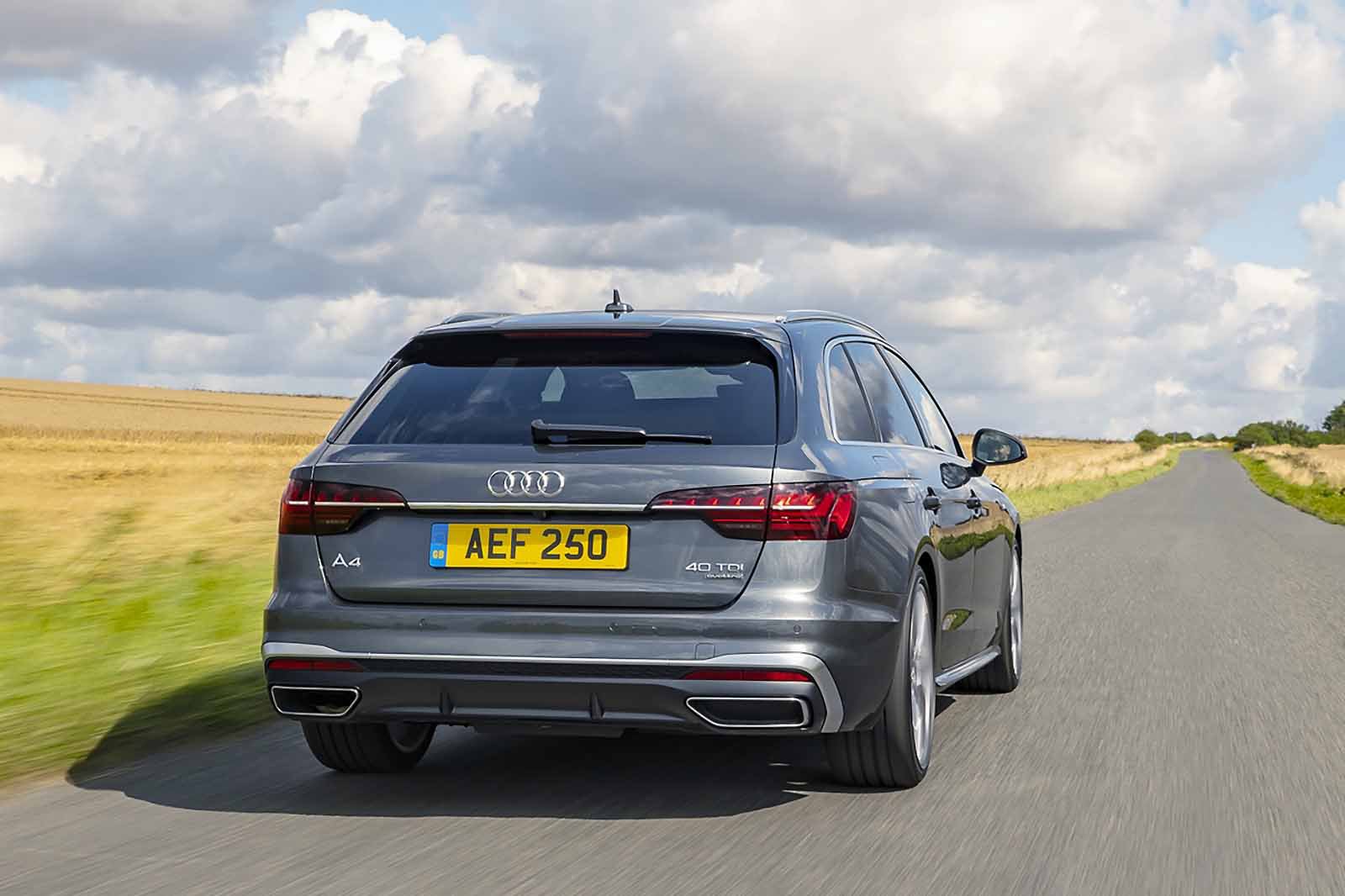 All Audi A4 Avants handle predictably and securely. They come with precise steering that weights up consistently as you turn in to bends, and grip the road very well. Versions equipped with the stiffer Sport (or Adaptive Sport) suspension feel the most nimble, staying flatter through corners and changing direction with extra eagerness.

Despite a little added body lean, we’d stick with the softer Comfort Dynamic suspension that’s standard on Technik and Sport Edition. It gives you a better balance between ride and handling (there are sharper-handling rivals if that really is your priority). The more powerful front-wheel-drive A4 Avants can struggle for traction if you put your foot down on the way out of a corner and the road is wet, but four-wheel-drive quattro models are pretty much unflappable.

We mentioned that the Audi A4 Avant has more dynamic rivals, and if you want something truly entertaining to drive you’re better off with the BMW 3 Series Touring. The larger Jaguar XF Sportbrake is another car that's worth looking at. Both are available with rear-wheel drive and steer more sweetly, helping to create more involvement on a spirited blast along a country road.

This is one of the Audi A4 Avant’s strongest suits. None of the engines, even the diesels, transmit much in the way of vibration through the body of the car. Even though the diesels are a bit more vocal than the petrols, every engine tends to be smoother and quieter than the equivalent BMW 3 Series and Mercedes C-Class.

It also betters its rivals in suppressing wind noise, and you’ll hear only the occasional muted thud from the suspension over the roughest patches of Tarmac. Road noise is also very well subdued, but try to avoid the bigger wheel and tyre options if you want to keep it as low as possible.

The Audi A4 Avant's six-speed manual gearbox is precise, light and easy to use, with a clutch that's easy to judge. The S tronic seven-speed automatic gearbox flicks up and down gears near-imperceptibly but can be a little jerky at parking speeds.