The 2.0-litre diesel (otherwise known as the 40 TDI) is a tad slow off the mark, but only because its standard seven-speed dual-clutch automatic gearbox hesitates when you put your foot down. That's also why it's slower from 0-62mph than a BMW 520d or Mercedes E220d, yet once you're rolling and the gearbox has woken up, it's plenty brisk enough and will outperform its rivals in a 30-70mph sprint.

So, the 40 TDI will prove more than sufficient for most people, but if you're hungry for even more poke, what about the 50 TDI 3.0-litre diesel? well, this is much gruntier across the entire rev range, providing effortless pace if you want to hot-foot it along country lanes or motorways. Our only issue is, again, gearbox-related; this time you get a regular auto 'box (with eight speeds), but it's so hamstrung by its own emissions-reducing set-up that it's reluctant to change down, which is hugely frustrating if you want to pounce on a gap in the traffic.

Instead, it's the 55 TFSI 3.0-litre petrol and the 50 TFSIe plug-in hybrid that respond most enthusiastically when you ask for a burst of acceleration. Even when you're running the latter in fully electric mode, its petrol engine springs into life quite quickly to help out.

There are four suspension options to choose from. Entry-level Sport trim uses conventional steel springs and dampers, S line models use the same, but stiffened and lowered, and there’s the option of adaptive suspension (on all but the 55 TFSIe) that comes with switchable dampers that can be softened or stiffened to suit your mood. Adaptive air suspension is an even pricier option which is available on the 50 TDI or 55 TFSI.

Both non-adaptive set-ups deliver a supple enough ride over large bumps, such as sleeping policemen, but even the softer non-S line springs tend to thump over sharper-edged potholes. This in itself is not particularly irksome, but it’s what the suspension does after a bump – which is spring back up like a jack-in-a-box – that quickly becomes tiring when you get pitched forwards and backwards in your seat.

To avoid such discomfort, we'd definitely recommend you opt for the adaptive dampers. They’re reasonably priced, are available even on the lowest-powered 40 TDI and, despite still being on the firm side, deliver a far more sophisticated balance between control and compliance. They also deal with broken stretches of asphalt more effectively, while controlling body movements over dips and crests extremely well.

But what if you’ve got your heart set on a V6 50 TDI; should you go the full hog and purchase the range-topping air suspension? Well, in most circumstances the air set-up is indeed softer and more compliant than the standard adaptive suspension. However, strike a large, sharp-edged obstacle with any pace and the suspension will produce a forceful thump that feels entirely inappropriate in such a sophisticated car. Factor in an expensive price tag for the air suspension and we’d recommend sticking with the standard adaptive dampers. 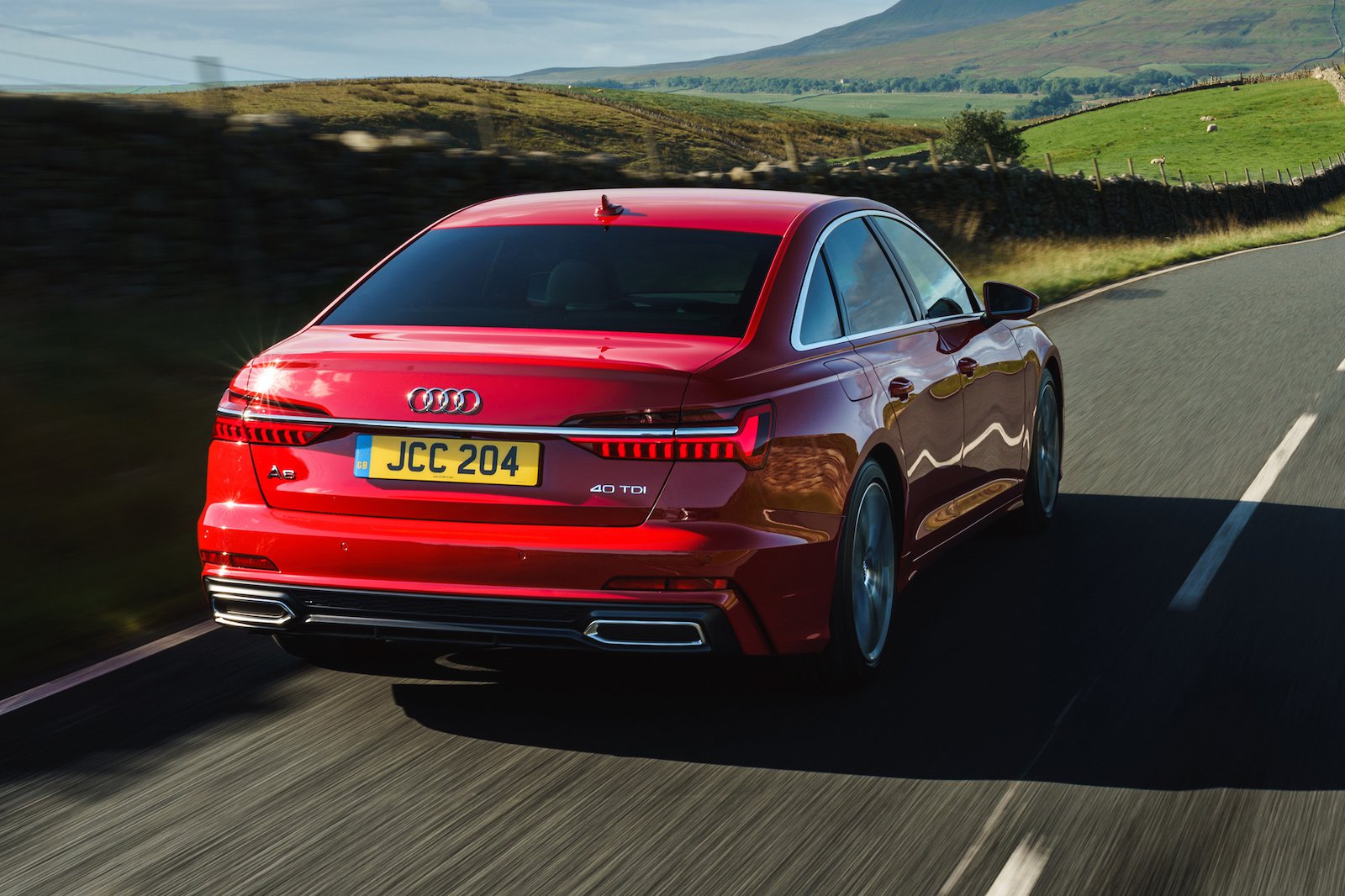 The A6 feels lighter and more agile than its size might suggest and, as a result, nimbler than most of its rivals – BMW 5 Series and Mercedes E-Class included. But not the Jaguar XF, which is still the driver's pick of the class. What the A6 lacks in comparison with the XF's delicious real-wheel drive balance, though, is made up for by buckets of grip and a benign chassis that lets you drive it hard with utter confidence in how it's going to react.

Take the steering, for example. It doesn't offer the same precision as the XF's, but is predictable in weight and smooth in response. Body roll, meanwhile, is kept under control through corners and during quick direction changes. You can also opt for four-wheel steering on pricier versions, which tightens the turning circle in town and increases stability at higher speeds, but, while effective, it's too expensive to count as a must-have option.

Even if you have no intention of driving like a getaway driver, you'll find the A6 an easy and relaxing car to handle on a long drive over varied roads.

All of the A6’s engines provide a generally hushed driving experience – exactly what you’d hope for in a car of this kind. In fact, for a four-cylinder diesel, the 40 TDI is one of the best in the business, proving quieter than the BMW 520d and Mercedes E220d, particularly around town or when getting up to motorway speeds. The 3.0-litre V6 models and the plug-in hybrid are even better, even though the latter isn't silent when running in pure-electric mode; instead you hear a bit of motor whine.

You might notice a few engine vibrations through the pedals and steering wheel of the diesels, too, but the A6 keeps road and wind noise to a minimum. It's only suspension noise that's more noticeable than it is in immediate rivals, at least in cars fitted with standard springs and dampers.

The seven-speed dual-clutch automatic gearbox that you get with the 2.0-litre diesel and 3.0-litre petrol can be slightly jerky when parking or in stop-start traffic. Meanwhile, the 3.0-litre diesel has a more conventional eight-speed auto which is better at slow speeds but less refined when you accelerate hard – it hesitates and then suddenly flares the revs with a substantial jolt. By contrast, the plug-in hybrid generally shifts smoothly, and it switches between petrol and electric power almost imperceptibly.