Understudies in musicals tend to get overlooked in the face of the show’s billed stars. The Volkswagen Passat Estate has enjoyed the limelight, while others like the Mazda 6 Tourer have somehow fallen shy of the spotlight. However, this third incarnation of the 6 sports sharper looks, a plusher interior and more efficient engines, so perhaps this time it can supplant the Passat.

The range kicks off with SE trim, which comes with 17in alloy wheels, air-con, a 5.8in touchscreen (7.0in with DAB radio from 2015 onwards) and cruise control. SE-L comes with a bit more kit, including automatic emergency braking, front and rear parking sensors, dual-zone climate control and an auto-dipping rear-view mirror, while Sport has bi-xenon headlights (LED after 2015) leather seats that are heated up front, 19in alloys, a Bose sound system and a head-up display. Any trim level with 'Nav' in the name has sat-nav fitted.

After the 2018 update, SE-L Nav became the base model but added an 8.0in infotainment system with Apple CarPlay and Android Auto, along with blindspot monitoring, adaptive cruise control and lane-keeping assistance. SE-L Lux Nav has full leather, heated front seats and steering wheel, a reversing camera and electric seat adjustment with adjustable lumbar support for the driver. Sport Nav continues much the same as before but adds keyless access, while the range-topping GT Sport Nav has a sunroof, front seat ventilation, heated rear seats and a 360deg camera system.

Ultimately, the 6 is a pleasant car to drive, with light but predictable steering. Push it hard and the front wheels start to run wide before rivals such as the Ford Mondeo and Skoda Superb do, particularly in tight bends. The ride can get a bit choppy over scraggy town roads, especially with the larger wheel options, but it settles down enough at motorway speeds to be tolerable. Sticking with smaller wheels helps to make the 6 a decent cruiser with less road noise to disturb you, although there is a flutter of wind noise from the door mirrors at high speeds.

Improvements were made to the interior in 2015 and helped to make the Mazda 6 feel more upmarket than rivals such as the Mondeo and Vauxhall Insignia. While there are still some cheap and flimsy plastics around the centre console, most of the dashboard is finished in squidgy materials and all the major buttons and controls have a nicely damped action to them.

Families will appreciate all the various storage spaces dotted around the interior. The Tourer has more head room in the back than the saloon version, thanks to its higher roofline, so even tall passengers will fit comfortably. It won’t beat the likes of the Skoda Superb Estate for overall boot volume (few cars can), but you do get a generous amount of luggage space that’ll cope with a couple of large suitcases or a child’s pushchair. Standard 60/40 split rear seats fold down flat with a quick pull of two levers in the boot, so you won’t need Ikea to deliver your flat-pack furniture for you. 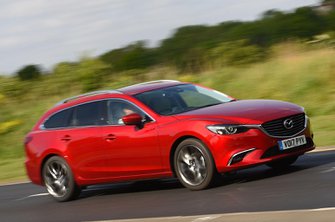