Let's begin with the obvious bit: that 4.0-litre V8 engine.  It makes a hell of a noise. Seriously, if you're shy and retiring then think about the quieter Audi RS6 or Porsche Panamera instead, because the E63 is a smile-inducing aural cocktail of snarls, bellows and barks. We think it sounds fabulous, and it really sets the tone for what this car's all about: having fun.

And a big chunk of the fun for many will come from its ludicrous straight-line pace. Having timed an E63 S Estate against an Audi RS6 Avant and discovered that the AMG romped off – it was 0.3sec quicker from 0-60mph and 0.6sec from 0-100mph – we can confirm that it's blisteringly quick on paper, and feels every bit as urgent from behind the wheel. It has all the firepower to keep up with a BMW M5 and Panamera Turbo E-Hybrid, that's for sure.

With all that mighty poke to deal with, it'll come as a great relief to many that four-wheel drive is standard, although, as with the M5, you can disengage it and make the E63 real-wheel drive – for a track day, perhaps. But keep it engaged on the road and the E63 is pretty docile when you simply want to get somewhere calmly, but you can still enjoy yourself when the mood takes you. Switch the stability control to Sport and put your foot down out of a corner and you'll feel immediately that a good chunk of the power is still sent to the rear wheels. This is the reason why the E63 feels more playful than the rather point-and-squirt RS6. It's not snappy, though, so if you drive it smoothly it feels agile and inherently balanced through bends, although an M5 Competition is more precise.

That said, we prefer the E63's steering. It's relatively heavy compared with the standard E-Class models, but that heft and the little sensations you get buzzing through the wheel rim, which map the road surface turning it into a form of braille for you read, adds a bit more involvement through corners as well as a sense of the grip available. That breeds confidence, and confidence is a good thing when a car has 600-plus BHP.

The nine-speed automatic gearbox is a bit clunky at times, even in its most relaxed setting, and can be quite brutal as it punches through gears in its sportiest drive modes. Even so, it lacks the pin-sharp responses of the Panamera's 'box but is far less lazy than the RS6's auto. Of course, when you fancy doing so there are paddles behind the steering wheel to play about changing the gears manually, which work pretty well.

This isn't the most relaxing car of its type. The ride isn't too hard but it is quite a bit firmer than an RS6's, even in its softest setting, especially around patched-up town roads where it thumps in much the same way as an M5 Competition will. The difference is that the E63's suspension is noisier than the M5's, twanging over every sharp edge. As you move to faster roads the ride does settle down appreciably.

That would make the E63 a decent long-distance cruiser, apart from the copious amount of grainy road noise it produces and the fair old flutter of wind noise from around its door mirrors. Again, the RS6 will suit anyone with a penchant for peace rather better. 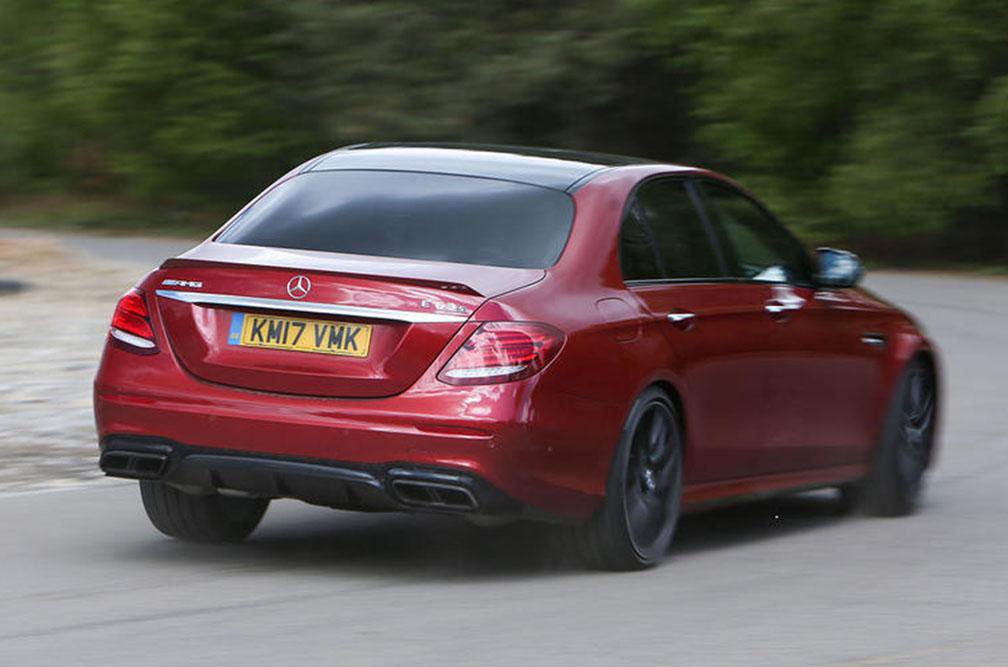