The 2013 Ford Kuga is an all-new version of Ford's SUV, and the latest model in the company's line-up to go global; it will be sold in Europe, Asia and North America in pretty much the same form.

It's new from the ground up, being both longer and roomier inside than the model it replaces. The latest Kuga also gets a bold new look and 96 litres more boot space.

We've been reasonably impressed with the high-powered 4x4 diesel version, but does this manual-only 148bhp 1.6 turbo petrol make any sense?

It's the cheapest way into a Kuga at 20,900, but even though it's the only model to get a stop-start system, it's far from the cheapest to run; fuel consumption and CO2 emissions are both much higher than in the diesel versions.

What's the 2013 Ford Kuga 1.6T 150 Ecoboost 2WD like to drive?
The driver is treated to the consistently weighted, accurate steering Ford has become famous for with its Focus and Fiesta models, and the fact that the gear lever is slightly raised makes it easier to enjoy the snappy geashift, too.

The 1.6T 2WD is the lightest model in the range, weighing some 127kgs less than the heaviest four-wheel drive diesel. Turn in feels sharper as a result and the Kuga controls its body movements well for something so high-sided.

Although you need to work it relatively hard to make swift progress, the 148bhp engine is strong enough to cope with motorway driving and is fairly quiet.

Up at the legal limit, things remain civilised, with road noise kept well suppressed and only a small amount of wind noise coming from around the door mirrors.

Unfortunately, the ride isn't so impressive. At town speeds, the car fidgets over broken Tarmac and drain covers.

Speed up and things improve, but Kuga's stiff suspension causes the car to toss you from side-to-side over quick changes of camber.

What's the 2013 Ford Kuga 1.6T 150 Ecoboost 2WD like inside?
One of the biggest problems with the old Kuga was its small boot, but capacity has risen from 360 litres to 456 litres. The space is well shaped, too, and there's no entry lip obstructing the floor of the load bay.

Just bear in mind that you only get all this extra space if you opt for a tyre repair kit; stick with the standard steel spare wheel and there's 406 litres, which is less space than you get in most rivals.

The rear seats drop in one movement, although they don't fold completely flat (there's a pronounced step between the cabin and boot) and there are no Mazda CX-5-style levers in the boot to make the process easier.

The rear passengers get a decent amount of legroom, although not enough to let a six-foot adult slouch. A very central tunnel provides impressive space for a central passenger's feet, however, and headroom is good in both the front and rear as long as you avoid the optional sunroof.

Up front, the dashboard is remarkably similar to a Focus's, and shares most of the same switchgear. It's smart enough, but the centre console is far too fussy, and many of the buttons are small and poorly labelled.

The infotainment system is rather fiddly, too, and the sat-nav screen is smaller than the previous model's, and set further back making it hard to read on the move.

The large, square door mirrors provide a good view of the road behind, although over-the-shoulder visibility is less impressive as the Kuga's thick rear pillars block much of your view.

The standard kit list includes everything you're likely to need, including a Bluetooth phone connection, cruise control, alloy wheels, electric windows and air-conditioning.

Should I buy one?
The 1.6T makes most sense to private buyers, and it looks good value compared with the rest of the rest of the Kuga range thanks to its low price tag and good list of standard kit.

The new Kuga has improved on its predecessor in some areas, too; namely interior space and practicality. On the other hand, it has fallen behind the competition in other respects principally ride quality.

Despite the Kuga's strengths, then, there are better SUVs to choose from. For instance, the entry-level Mazda CX-5 might be 495 more expensive to buy, but it's better equipped, cleaner, more economical and more practical even before you consider its more accomplished drive. 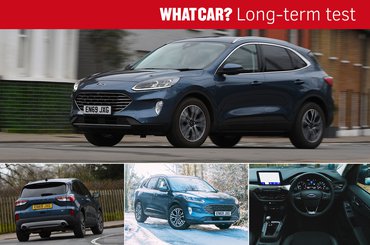