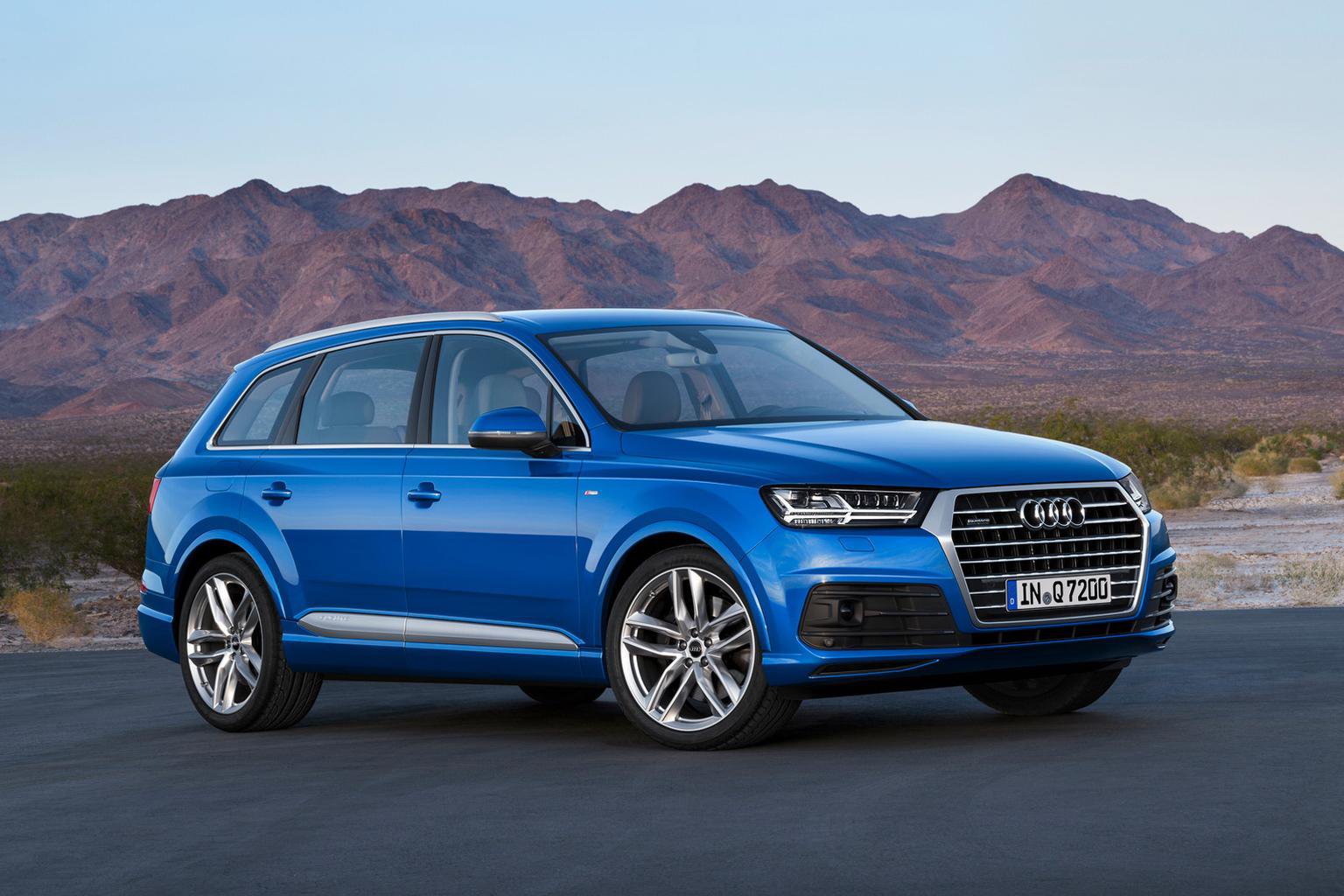 This is thanks to 100kg being cut from the Q7’s suspension and 71kg taken out of the body. Of this, 24kg is because of the use of aluminium doors.

Refreshed styling tweaks for the Q7 include a bold new single-frame grille similar to that on the recently face-lifted Q3, more defined wheel arches and numerous crease lines to help it appear smaller.

Extensive use of underbody cladding and, on selected models, elements within the grille that automatically close to cut wind turbulence when engine bay cooling is not required, has reduced drag.

The new Audi is the same height as the old car, but is 370mm shorter and 15mm narrower. The wheelbase has also been reduced, but only by 10mm, at 2990mm.

Despite the reduction in external dimensions, Audi says the interior of the new Q7 is bigger than before and has been significantly altered, although it still comes with seven seats as standard.

There is 21mm more room between the first and second rows of seats, as well as 41mm and 23mm more headroom. The third row of seats also offer 24mm more headroom and 20mm more shoulder room than before.

The new model gets a modern dashboard with very few buttons, a freestanding infotainment monitor, digital instrument panel similar to that on the latest TT and a newly designed MMI controller and gearlever.

What engines does the Q7 come with?

A 215bhp version of the 3.0-litre TDI will be available later in the summer.

The maximum towing capacity for both models is put at 3500kg.

The plug-in hybrid version, the Audi Q7 e-tron quattro, is claimed to have a range of 876 miles, and has an official fuel economy of 166.2mpg, while it emits just 50g/km of CO2.

What equipment does the Q7 come with?

Two specifications of Q7 will be available in the UK, SE and S Line. The former offers leather upholstery and 19-inch alloy wheels, while the S Line car gets additional larger 20-inch wheels.

The new Q7 will also come with features such as an all-new voice control system which understands a range of phrases. Saying: "I want to eat something" will bring up a list of local restaurants, for example. It will also offer seven seats as standard, as well as leather upholstery.

It will also offer one or two 10.1in Audi tablets for entertainment in the rear. These can not only play films, but connect to the internet via the Q7's in-car wifi connection.

How much will the Q7 cost?

Discounts on the current Q7 are perhaps skewed by the fact that the current model is nearing the end of its life after having been on sale for a relatively long time. Our Target Price team reckons you can get between around £3500 and £5500 off the Q7's list price, although this doesn't represent a huge saving in percentage terms, given the Audi currently starts at £43,895.

The Audi Q7 faces up to competition like the BMW X5, Porsche Cayenne, Range Rover and the recently renamed Mercedes GLE. The BMW and Porsche offer a high level of luxury both from the cabin and the driving experience, and the GLE is due a refresh at the same time as the Q7.

While all of these cars offer a fantastic level of quality, it is the Range Rover that leads the pack.