Well ahead of the car’s launch, we’ve driven the third-generation Hyundai i30 1.4 Turbo. How is it shaping up so far?...

The current Hyundai i30 has proved a perfectly worthy competitor to the likes of the Ford Focus and Volkswagen Golf. Sadly that’s about the best thing you can say about it; while a long warranty, practical interior and decent equipment levels work in its favour, it’s not great to drive, doesn’t give you a warm, fuzzy feeling when you climb inside and has an engine range that is off the pace for both emissions and performance.

Thankfully, the third-generation of the i30 is due to go on sale in the first quarter of 2017 and we’ve been given an early go. Importantly, we've sampled a new 1.4-litre turbocharged petrol engine that should help take the fight to mainstream rivals.

Although the final layers of polish need to be added to this new car, it’s close enough to production to give us a good idea of what to expect next year. As for the looks, all will be revealed at the Paris Motor Show in October.

Hitting the start button reveals an engine that starts with little vibration before settling into an almost inaudible idle – impressive considering some sound-deadening material hasn’t been fitted yet. We slide the seven-speed dual clutch automatic gearbox into drive and pull away.

At low speeds the ‘box – shared with the current car – reacts smoothly with barely any interruption to acceleration when shifting. With the engine revs kept low, the powertrain seems very refined indeed. Ask for more performance, however, and there is some jerkiness to proceedings. Like we said, the final bit of polish needs to be applied. 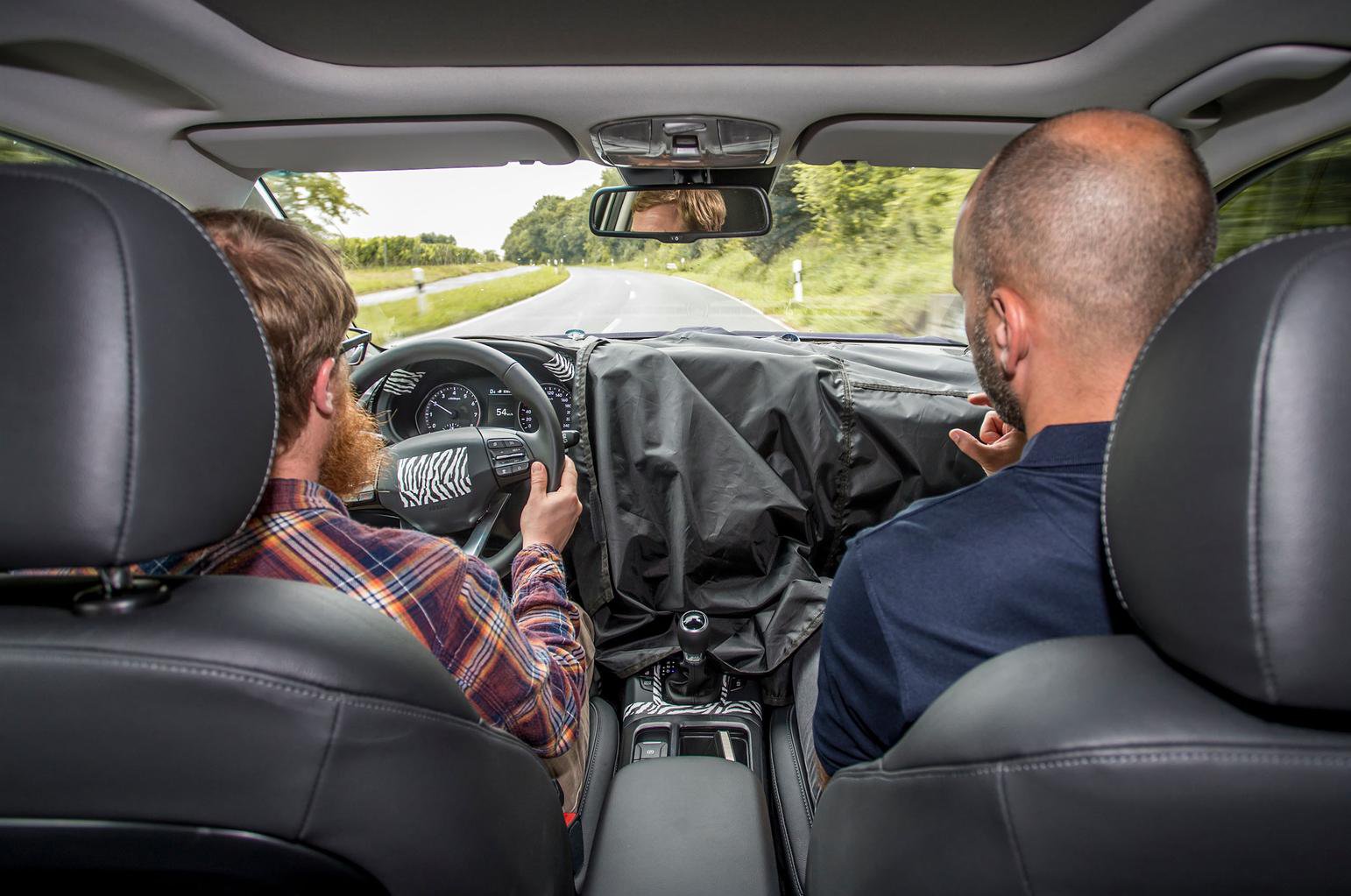 Not that the engine needs much work it seems. The 1.4-litre turbo has decent punch from low revs and feels reasonably brisk if you work it hard. It can start to get vocal, but it isn’t too intrusive and actually sounds fairly sporty. If Hyundai can get decent economy and emissions figures out of it, then it’s a big step on from the current mid-range petrol engine.

The i30 can feel a little bumpy over scruffy surfaces, due partly to big 17in wheels and also fairly stiff suspension. This does at least mean little body roll, no wallow over bumps and a feeling of agility. Helping here is quick and well weighted steering. Engineers we spoke to suggested that testing in the UK is possible; hopefully that might mean a bit more comfort.

Like the outside, the inside of the i30 is heavily disguised. Most of the dash is draped with a black cover while the doors have stripy tape stuck to them to hide their shape. We are able to peek at the dash, but sadly we can’t take any pictures.

What we can say is that the infotainment screen is mounted high on the dash Mercedes-style, there’s a big cubby-hole in front of the gearlever that can swallow an iPhone Plus, and there’s plenty of soft touch plastic around areas you touch frequently. 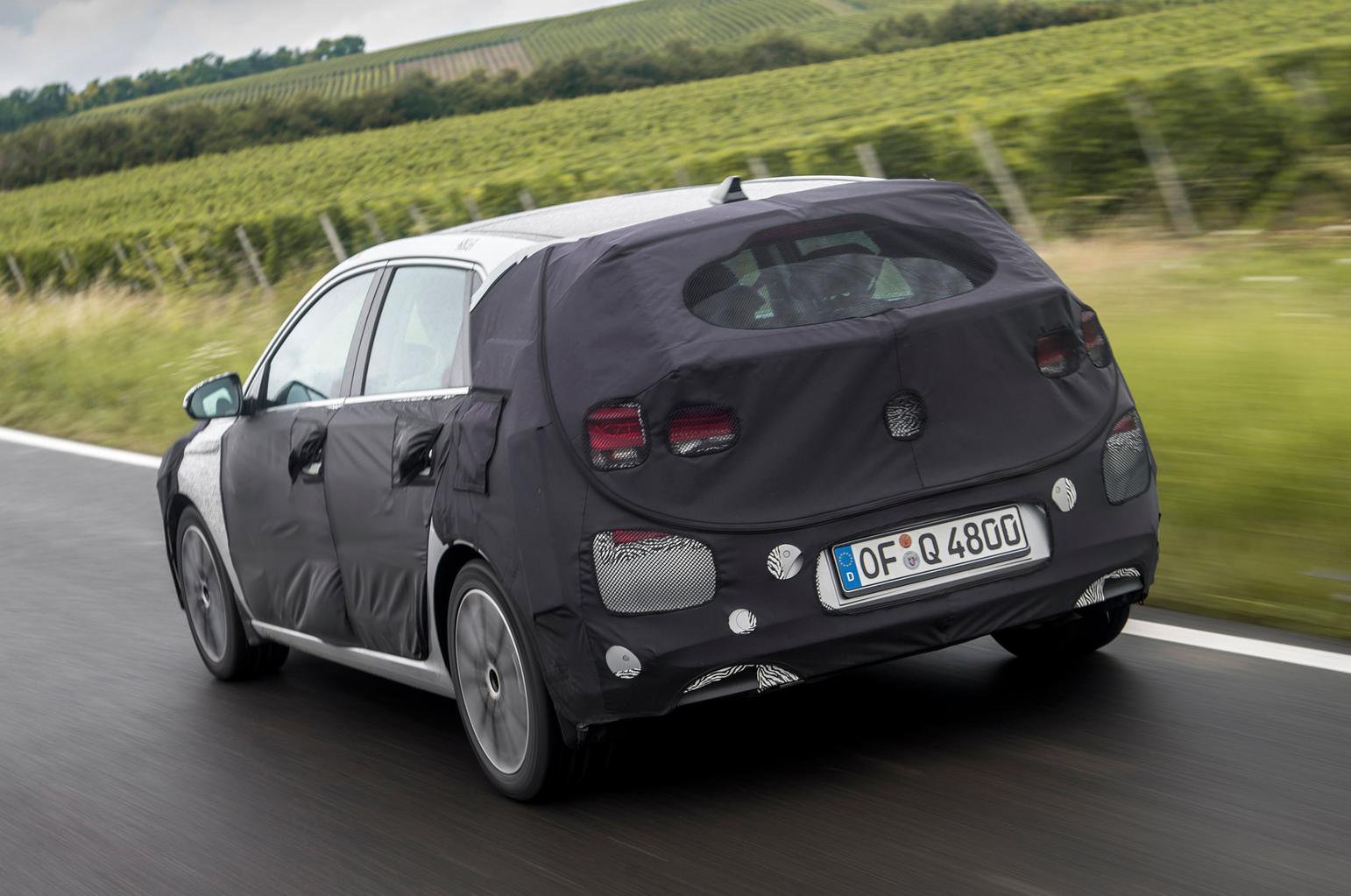 There is also a lot of hard, shiny plastic, but this will be replaced with nicer materials on production cars. Rear seat space looks on par for the class although sadly we didn’t get to look in the boot. It certainly seems like Hyundai has made plenty of worthwhile improvements, though.

While our initial impressions are certainly good, it’s far too soon to say whether we could recommend the latest i30. Considering the improved engines, decent driving dynamics and interior that should be better than before, we’re keen to see the finished article.