If you watched television in the Eighties and had an interest in cars, the steering apparatus in the new Lexus RZ electric SUV will probably look familiar. That’s because one of the options for the RZ is to replace the traditional wheel with a steering yoke – a design reminiscent of KITT from Knight Rider.

Lexus expects one in four RZ buyers to opt for this new ‘One Motion Grip’ system, which it says will give faster responses and more precise control for drivers, as well as a better view over the car’s instruments. The system also includes a driver-facing camera that monitors the driver for signs of distraction or fatigue, and will sound an alarm if necessary. 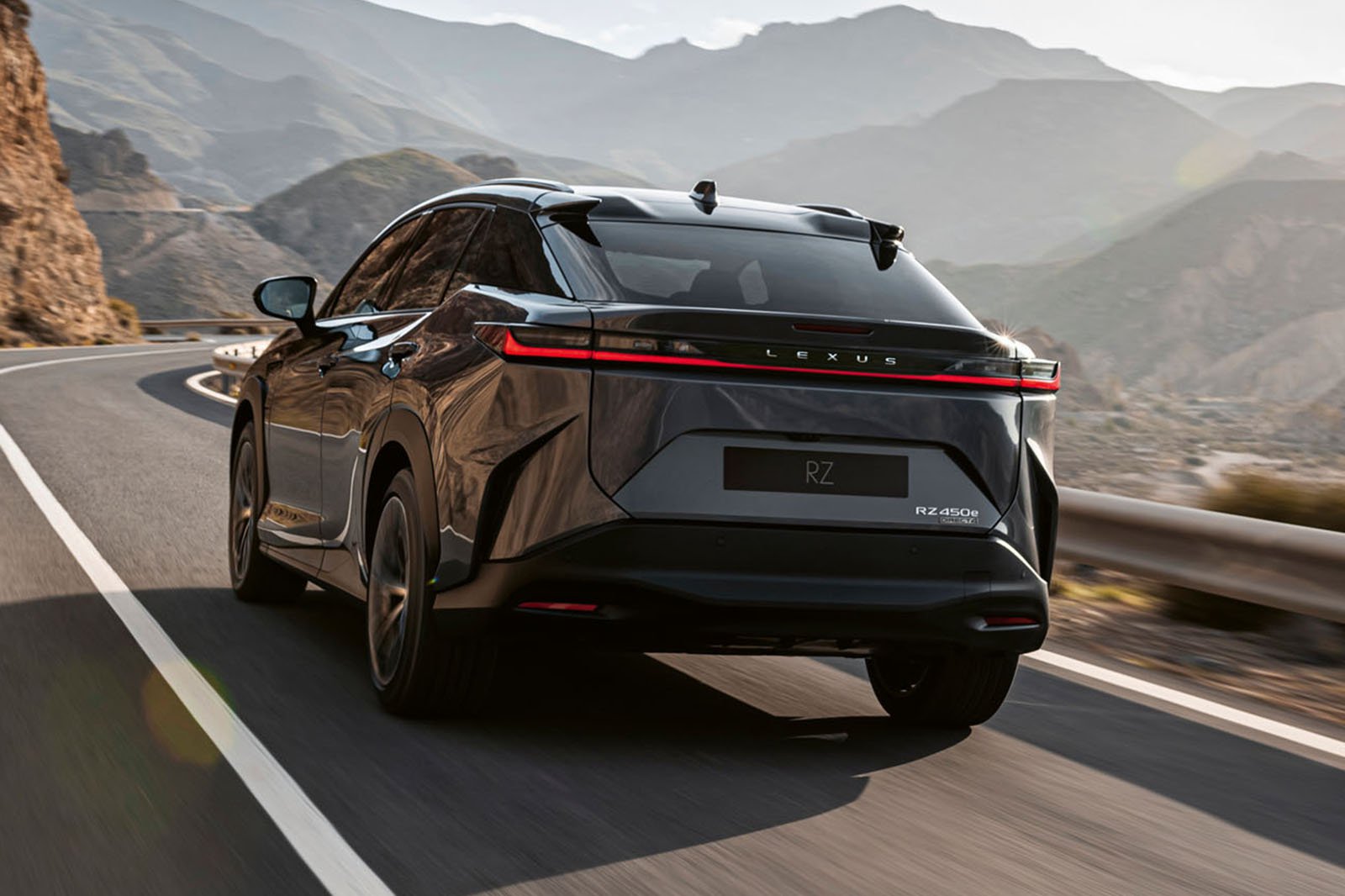 The rest of the RZ’s interior is less futuristic (but still useful), combining a digital instrument panel, a 14in infotainment screen and a head-up display that can put the most critical information in your line of sight.

We’ve been impressed by the latest Lexus infotainment system when we’ve tested it in the smaller NX SUV, because although it’s controlled by touch rather than using a rotary dial, it does at least offer well spaced out icons and responds quickly to inputs. It also comes with Apple Carplay and Android Auto smartphone mirroring, so you can bypass it with your phone apps if you want, and user-friendly physical controls for adjusting the interior temperature. 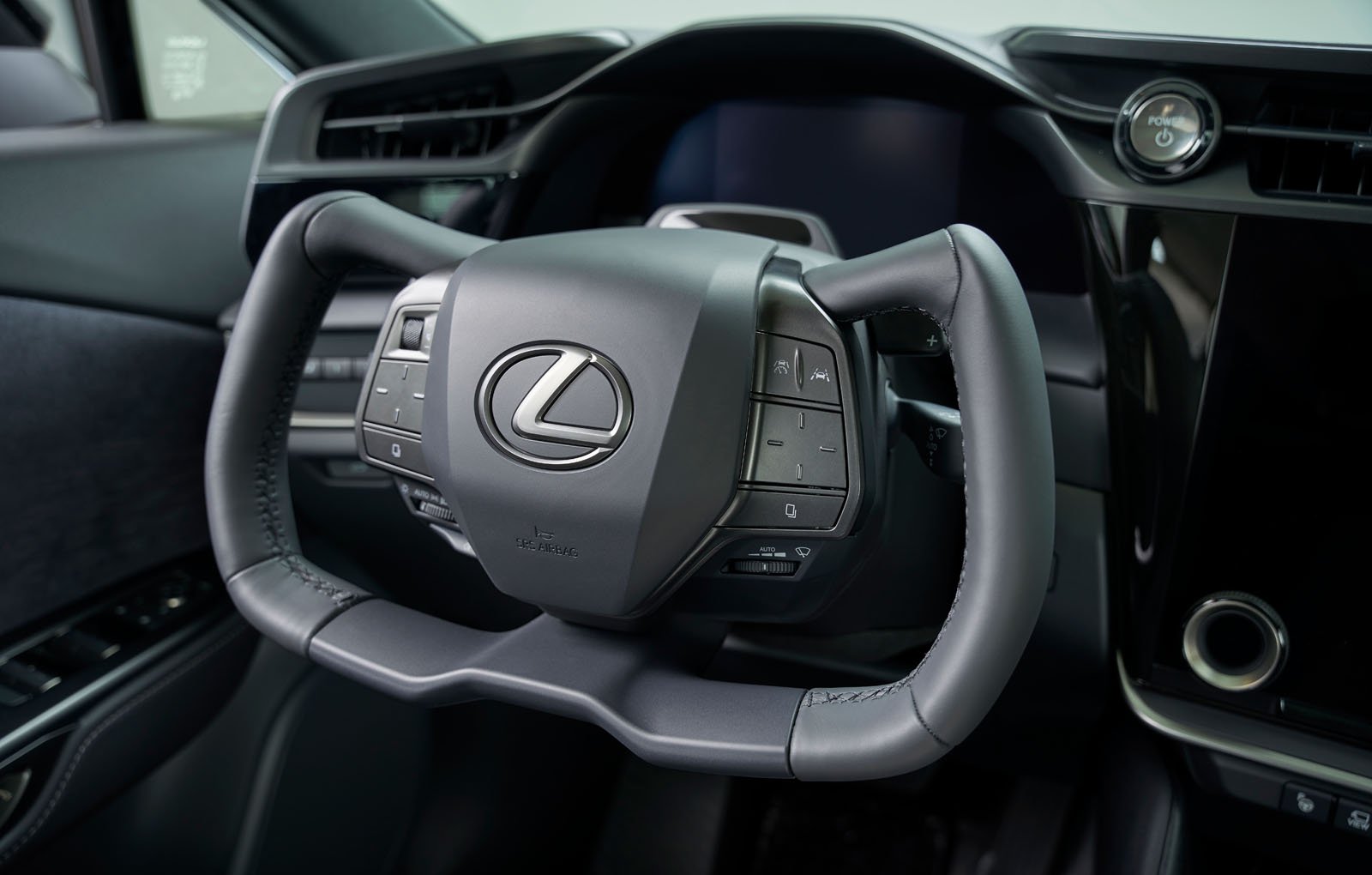 There’s also a dial for changing gear on the centre console, the option of interior trim made of biomaterials and a panoramic glass roof that can be dimmed electronically at the touch of a button – a feature even KITT didn’t have.

Another option is a knee-level heater designed to warm your legs more efficiently to reduce the load on the air conditioning system, in turn increasing the electric range. 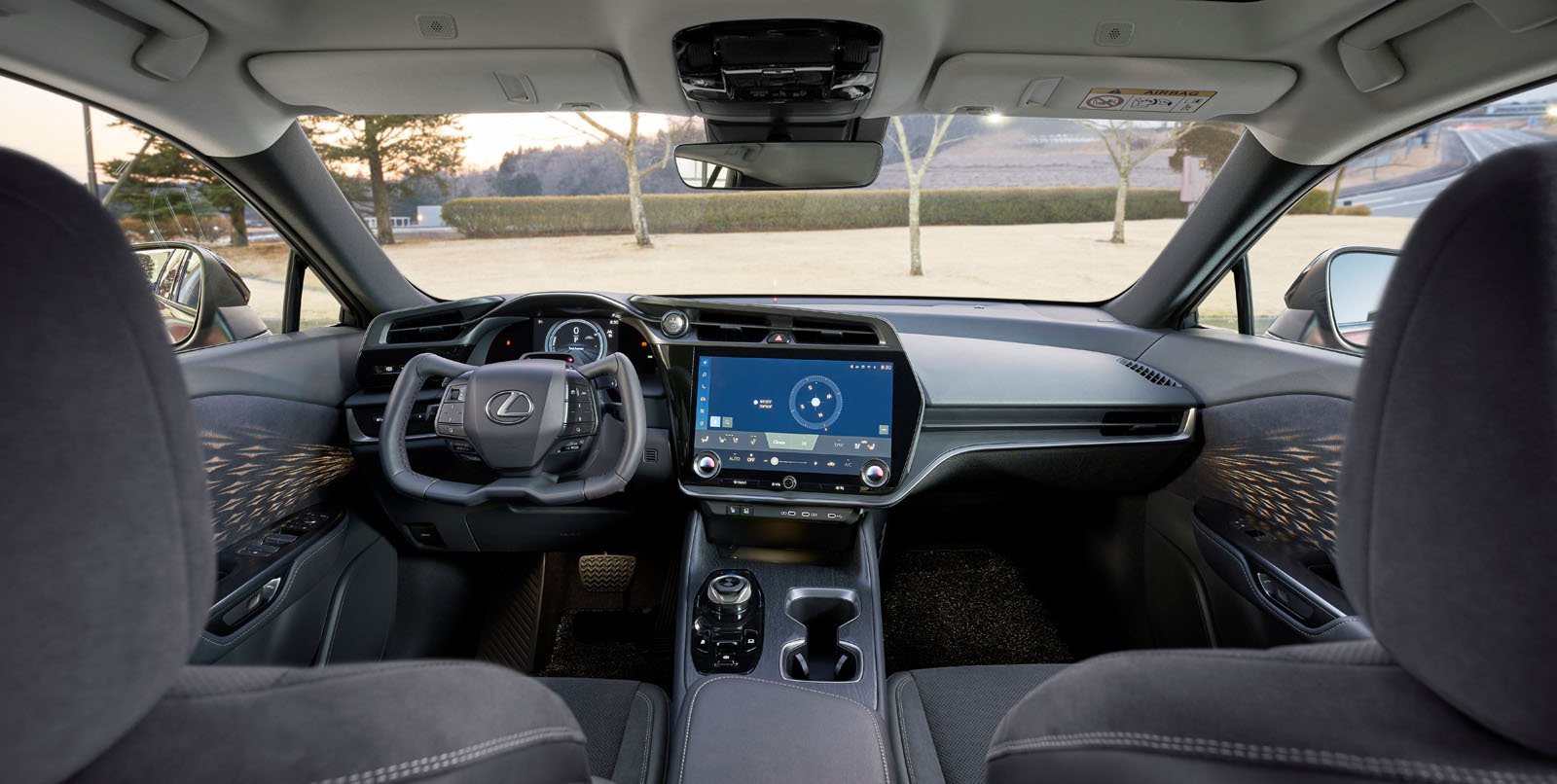 The interior dimensions have not yet been confirmed, but we do know that the five-seat RZ will have more than 500 litres of boot space. That’s about the same as the NX, and means your family’s holiday luggage should fit in without any problems.

At launch, the RZ will be driven by two electric motors producing a combined 536bhp, with power from a 71.4kWh battery pack. Official range figures are not available so far, but it should manage at least 250 miles between charges. That’s less than the Kia EV6 – our reigning Car of the Year – but more than the Audi E-tron in S form and the BMW iX xDrive40 (although those two can tow more than the RZ’s pulling limit, which is 750kg). 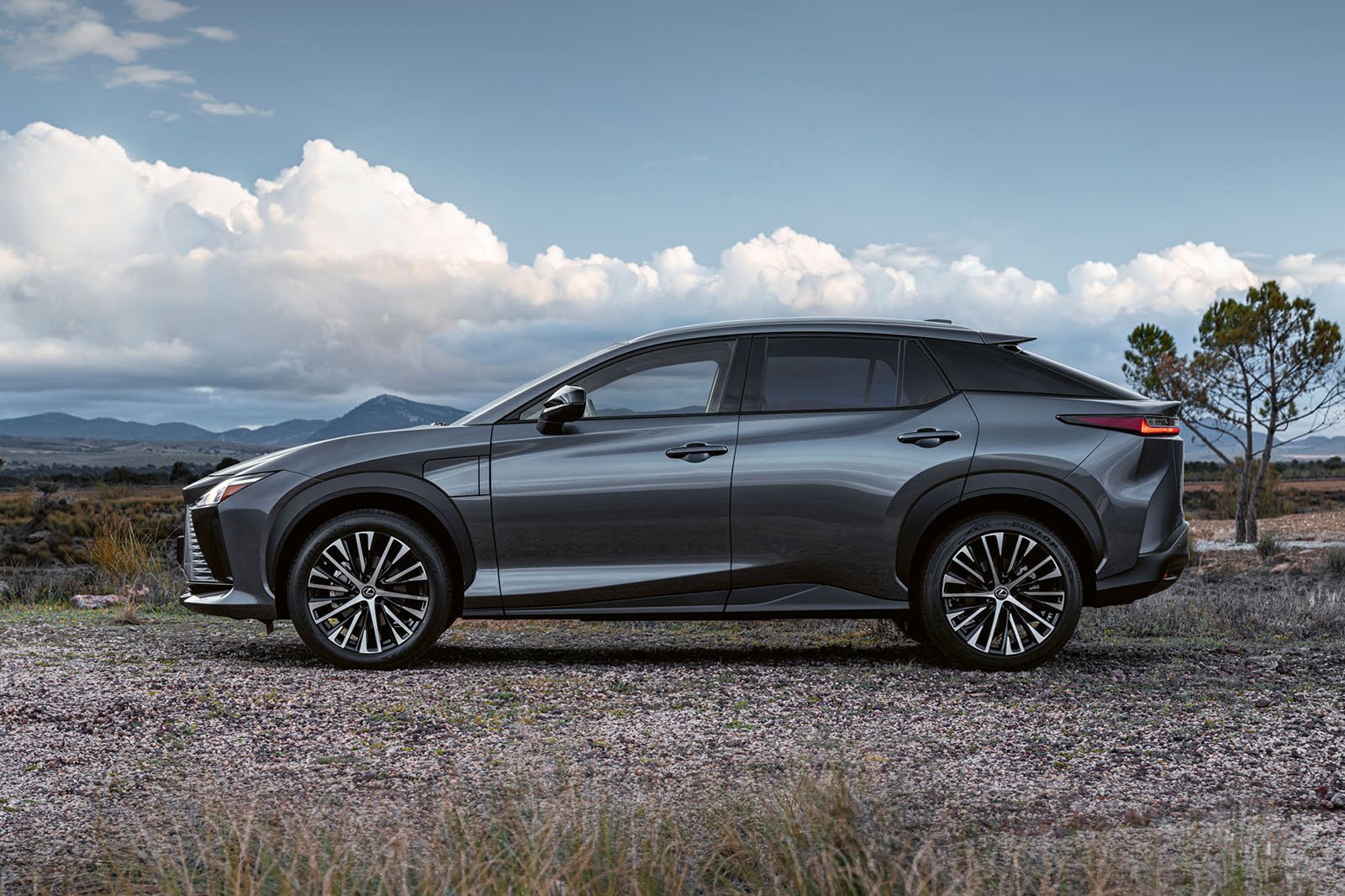 In terms of performance, the dual-motor RZ has a 0-62mph time of 5.6sec and a top speed of 99mph. Lexus has not yet confirmed plans for other versions, but an RZ with a single electric motor and a lower price tag is likely to join the range later on. Indeed, the Toyota bZ4X, with which the Lexus shares its mechanical parts, is already offered in this form.

No charging information has been released yet, but we’d expect the RZ to be capable of using the fastest public charging points, and a 10-80% charge to take around half an hour if you find a suitably juicy connection. 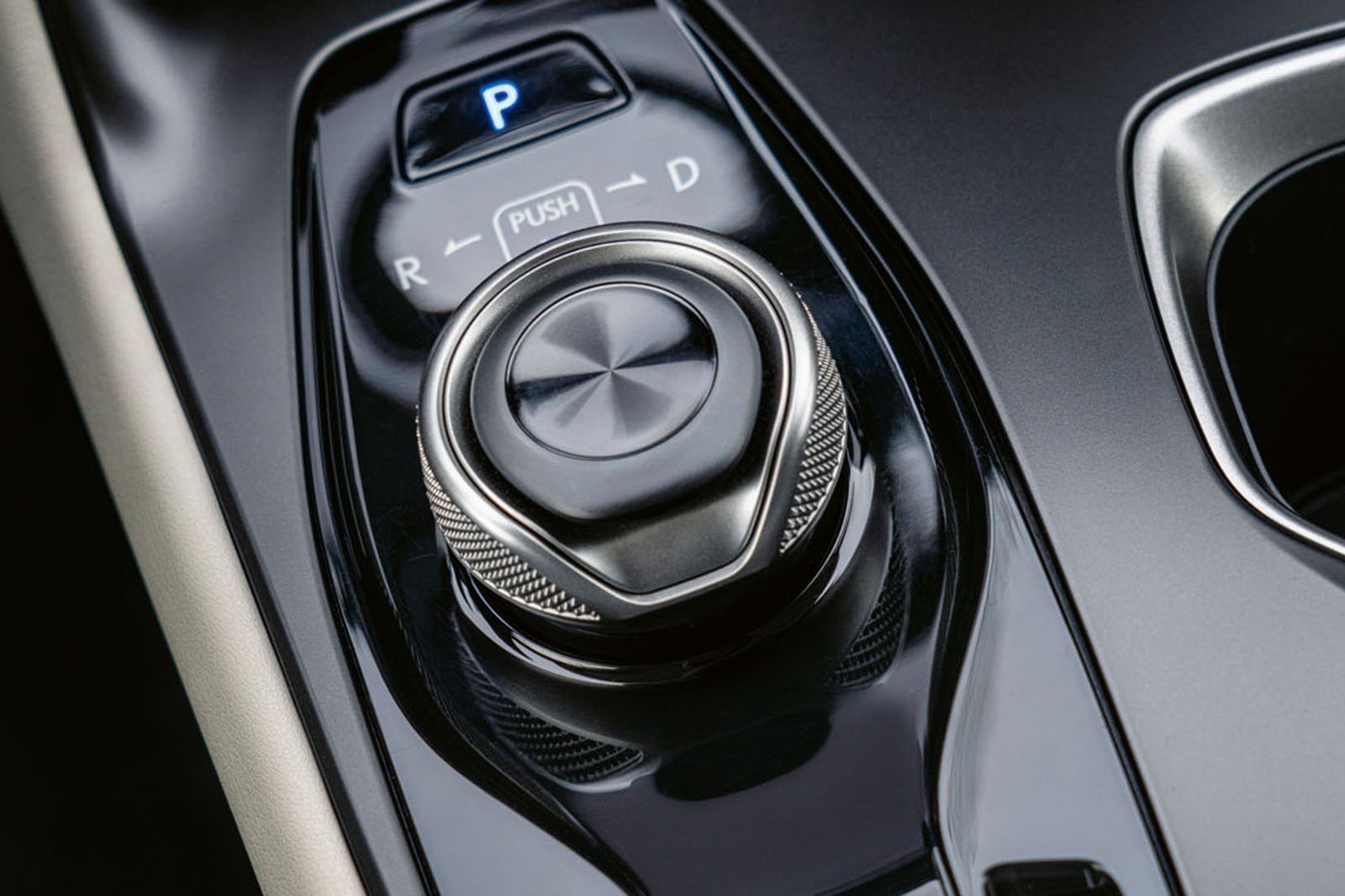 As well as its driver tiredness camera, the RZ gets plenty of other high-tech safety kit. That includes a system to stop you opening the door if it detects an approaching object, such as a cyclist, in your blind-spot. Lexus reckons that could prevent up to 95% of accidents caused by opening a car door. There’s also an optional digital rear-view mirror giving the driver a clear view behind even when there are passengers or clutter in the way.

The price of the RZ is likely to fall between the smaller NX and the larger RX luxury SUV. That means it’s likely to start at around £52,000, which usefully undercuts both the E-tron and the iX, and puts it into the same territory as dual-motor versions of the EV6.