More for you |
DVLA warns of 20% increase in car scamsWhat Car?'s top 10 used electric cars (and the one to avoid)10 most unreliable SUVsWhat Car?'s best cars for less than £250 per monthGuaranteed discounts on our 2020 Award winners - save up to £19,366
Home
News
4. Toyota FT-EV
news

* Five show disappointments * What left us feeling let down? * See the pictures... 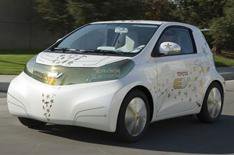 Toyotas new FT-EV concept car had all the right ingredients - but failed to hit the spot.

Although it hints at exciting technology that will be used when it puts an electric car into mass production in 2012, it is hidden in a mildly modified iQ shell, and was completely overshadowed by the launch of the Toyota Prius.

The FT-EV is designed for use by people with daily journeys of up to 50 miles. That range is expected to be the goal for the production car.

The exterior and interior of the iQ also show some of the technology the FT-EV will use to maximise its range, including the aerodynamic front end and the range monitor inside the car.

Toyota is also expected to use the show to unveil the next generation Prius hybrid production car, announce imminent trials of a plug-in version of the next Prius and reveal a hybrid Lexus.

Sales goals and new launches
These launches underline Toyota's pledge to sell more than one million petrol-engined hybrid cars in a year before 2020.

To achieve this goal it has pledged to launch up to 10 new hybrid cars 'during the early 2010s'.

The next generation Prius on sale this year will still use nickel-hydride batteries, which are larger and store less power than lithium ion units.

In total, 500 plug-in versions of the Prius will go on trial around the world this year.