* 60-mile traffic jam in China * Roadworks to continue for another three weeks * Not a record-breaking jam (yet)... 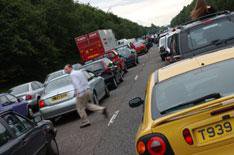 If you are bracing yourself for the annual Bank Holiday traffic this weekend, spare a thought for the drivers on China's Beijing-Zhangjiakou highway in their 10th day of being stuck in a 60-mile traffic jam.

Local officials have warned that the jam, on a highway that connects Beijing to Inner Mongolia, could continue for some time yet as the construction that has been blamed for the gridlock won't be finished until September 17.

The traffic jam started on August 14 on a stretch of road that has been frequently congested, especially after large coalfields were discovered in Inner Mongolia.

The 60-mile tailback is starting to move, albeit slowly, but at the moment it's not classed as the world's longest or busiest traffic jam.

According to the Guinness Book of World Records those dubious records belong to France and Germany. The longest ever reported was that which stretched 109 miles northwards from Lyon towards Paris, France on February 16 1980

And a record traffic jam of 18 million cars crawling bumper-to-bumper was reported on the East-West German border on April 12 1990.

Traffic jams are not a new phenomenon either. Julius Caesar banned carts and chariots from Rome during daytime in the first century BC.

The Highways Agency doesn't keep records of Britain's longest or busiest traffic jams, but for drivers heading out on the motorways for the Bank Holiday a spokesman said, 'We generally try to lift roadworks over busy periods', so hopefully we won't see anything like the chaos in China.