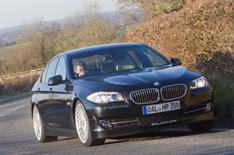 The Alpina D5 Bi-Turbo could be the most relevant performance saloon in the world right now.

Think about it; how many other cars can hit 62mph from rest in 5.1 seconds and top 170mph yet also achieve average economy of 47.9mpg and produce just 155g/km of CO2? Answer: none.

Based on the BMW 535d M Sport , the D5 has a bespoke interior, retuned electronic suspension and, of course, produces much more power and torque from its 3.0-litre twin-turbo diesel engine. The headline figures are 345bhp and 516lb ft.

Whats it like to drive? The D5 manages to feel fluid and refined, but also aggressive and well controlled not to mention extremely rapid all at the same time.

Compared with the basic 535d (the car that provides the platform for the D5) the electronic dampers have been retuned to offer a far wider variety of settings. So Comfort + offers a more soothing ride than in a regular 5 Series , while at the other extreme, Sport + becomes firmer and more aggressive.

What distinguishes the D5 even more obviously, of course, is what happens when you put your foot down and hold it there.

The initial response isnt quite in the same league as it is in BMW's M5, because the D5's engine takes a great big breath through its two turbos before the moment of the truth arrives.

When it does, however, the car lunges towards the horizon as if its being dragged there by some higher force.

The flood of torque, allied to the speed with which the eight-speed automatic gearbox (also retuned by Alpina) picks off gears, provides it with a never-ending wave of performance, one that in its way feels every bit as monstrous as whats on offer in the M5.

Whats it like inside? Pretty special, truth be told.

When the regular 5 Series arrives at Alpina, the first thing that happens to it is the complete removal of the interior, seats and all.

The car is then refitted with higher-quality leather and many other bespoke features, all of which lift the ambience to another level.

The build quality is superb, the D5 is well equipped given its competitive price, and theres as much room on offer in the rear seats and boot as there is in any other 5 Series plenty.

Should I buy one? If youre in the market for a stylish, extremely rapid, surprisingly economical sports saloon, its hard to think of anything that can top the B5 right now.

Until BMW's own hot diesels appear later this year, the D5 has this small but significant segment sewn up.

Even when the factory cars do eventually appear, theyll have a job to better this extraordinary car.