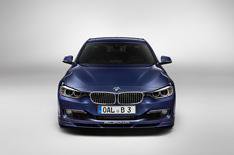 Details and photos of the BMW Alpina B3 Biturbo have been released ahead of its launch at the Geneva motor show.

The BMW 3 Series-based B3 Biturbo uses the six-cylinder 335i engine as its base, but the addition of a second turbocharger boosts output by 102bhp to a mighty 404bhp.

Despite this level of performance, the B3 has an impressive claimed average economy of 37.2mpg and CO2 emissions of just 177g/km.

The Alpina B3 Biturbo will be available in both saloon and estate bodystyles.

Teaser shots of the car show a low front bumper and a pronounced boot spoiler. It has been confirmed that the B3 will get 20-inch alloys and a twin-pipe exhaust.

It will come with adaptive suspension and an eight-speed automatic gearbox. Interior styling and equipment levels haven't been revealed, but Alpina will provide the same upgrades that are offered on all of its models.

UK prices have yet to be confirmed, but we expect a starting point of around 56,000. The B3 is available to order now, with deliveries from July.