And the mpg is? 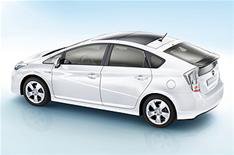 And the mpg is?
Official economy and emissions figures for Euro-spec models aren't being released until the Geneva motor show in March, but insiders have told us that CO2 'will be below 100g/km', making the Prius exempt from road tax for the first time.

In the US, fuel consumption has improved by 8.7% a figure which, if repeated this side of the Atlantic, would mean average economy of 71mpg. No other petrol-engined car comes close, and only a handful of diesel eco-specials beat it.

To achieve such figures, Toyota virtually had to start from scratch with the new model. The Prius remains a parallel hybrid which means it can be powered purely by its batteries (although only at low speed for a very limited time), the petrol engine or a combination of both but within that framework almost everything has changed.

The primary power source is now a 98bhp 1.8-litre petrol engine instead of a 77bhp 1.5 unit, and it's also hooked up to a more powerful electric motor for a maximum combined output of 134bhp. There's also more torque, which means the petrol engine is less stressed, and therefore more economical, at higher speeds.