Audi Q1 crossover on the way? 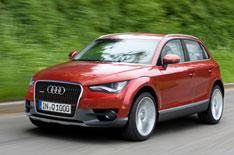 An A1-based crossover called the Q1 could well be on the way from Audi in 2012.

As our artist's impression of a Q1 shows, it would be an upmarket rival to cars such as the Nissan Juke, and a direct competitor to the proposed Mini Paceman, and would probably cost from around 18,000.

There is a wide range of engine options open to Audi including the excellent 1.4 TSI direct-injection petrol, which produces from 120bhp to 182bhp, and 1.6-litre diesels.

Four-wheel-drive versions would certainly be an option using the same system that the Audi has developed for the sporty range-topping 182bhp S Line.

Audi has boasted that production will hit record highs this year and no fewer than 13 new models will be introduced, including the all-new A6 and convertible and five-door versions of the A1. This year is probably a little early for the Q1, but we expect the car to surface in 2012.