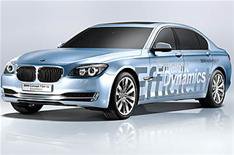 BMW will unveil a hybrid-powered limousine at the Paris motor show next month, in the form a 7 Series ActiveHybrid.

The car is officially a concept car, but it's expected to go on sale next autumn.

It is powered by a combination of a 4.4-litre V8 petrol engine and a lithium-ion battery unit that, in total, produces 427bhp.

BMW says it returns 15% better fuel consumption than the new 750i, upon which it is largely based, suggesting a combined average of around 28mpg.

Also on show in Paris will be a X6 ActiveHybrid.