More for you |
Electric car waiting times revealedCoronavirus advice: How do I renew my car's tax if its MOT has expired? Best small cars 2020Past Master: Audi TT Mk1Coronavirus advice: how to contact What Car?
Home
News
Calls for slow-driver legislation
news

* Lobby group targets slow drivers * with calls to force them off the road * Wants legislation to make roads safer... 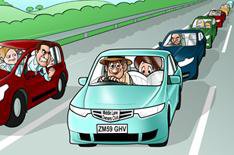 People who drive too slowly should be forced off the road, according to the Association of British Drivers (ABD).

The lobby group is calling for the introduction of laws to make slow-moving vehicles pull in and allow faster vehicles to pass in an attempt to make the roads safer.

It made the comments after comparison website confused.com published research that revealed 60% of motorists get stressed and irritated by slow drivers.

The ABD is not, however, supporting proposals by the comparison website for minimum speed limits enforced by cameras.

If everybody drove at the speed a reasonable person would expect to travel, the roads would be much safer, less stressful places for all, said ABD chairman Brian Gregory.

Unfortunately there will always be those who wish to travel either dangerously fast or far too slow causing congestion and prompting rash behaviour.