* Which system is most user-friendly? * We test six of the best-sellers * Find the results, here... 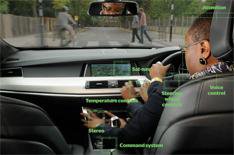 Here are Lola's conclusions on the six best-selling systems. Just click below to visit each version.

Each system is reviewed and given awards for areas where it excels - if applicable of course.

Browse the list below to see exactly what usability expert Lola Oyelayo thought of each system tested.

3rd= Infiniti Connectiviti+
'The combination of a touch-screen and buttons is great. However, having the buttons so close to the screen means that your hands rest in a very awkward position whichever one you use. The angle of the buttons is something Infiniti has worked on since, but they still need to be more angled.

'It was the easiest system to pair up with my mobile phone and iPod. I would rate the iPod connectivity as flawless: it was almost exactly like using the iPod itself, and even showed playlists and album covers of playing tracks.

'The sat-nav needed simplifying on many levels, though. I worked at this for a while, but was never fully comfortable with which destination was selected without a lot of playing with buttons and scrolling through menu options. Also, I'm sure it is possible to de-clutter the amount of information on the map, but there was no obvious way to do this.

'The voice command wasn't immediately intuitive to operate, either, and it didn't
pick up my commands as well as the systems in some of the other cars. I was also forced to break down all my voice commands into very simple instructions.'

Awkwardly angled buttons;neat touch-screen, but complex sat-nav
Awards:
Best iPod integration; best phone integration
3rd= Mercedes-Benz COMAND
'The layout of the controls has been designed with simplicity in mind, but the result is an isolated main control dial. What's more, the mode selection buttons are away from that central dial, on the dashboard next to the volume control which is another round dial. As a result, my initial reaction was to gravitate towards the wrong dial. Familiarity would change that, but it is a frustration.

'In contract, the steering wheel controls and central dash display are excellent. The controls are scrollable from one dial, unlike the button/dial combo on the main panel.

'The display screen seemed small in comparison with some of the others, which was strange because there seemed to be room to make it larger. This was most striking as I delved deeper into the navigation options, to the point that I could no longer see the map itself. That said, the instructions you are given are generally excellent you never get more or less information than you need.

'The visual design isn't as good as the Audi's or BMW's, but it gets the job done in a no-frills way. The old, wireless-style radio display is a neat touch, but the horizontal view of multiple radio stations and the CD/iPod tracks isn't so neat.'