More for you |
True MPG: most and least efficient cars revealedConfessions of an AA technicianUsed BMW i3 vs VW e-GolfHow to spec a Jaguar XENew issue of What Car? magazine on sale now
Home
News
Crowning glory for a Koenigsegg
news

Crowning glory for a Koenigsegg

* Koenigsegg and Thule produce bespoke roofbox * Lifts Ageras total luggage capacity to 420 litres * Due to be unveiled at the Geneva motor show... 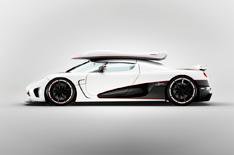 Koenigsegg owners no longer have to leave their supercar at home when they go on holiday, because now they can get a specially designed roofbox to go with it.

A collaboration between Koenigsegg and roofbox manufacturer Thule has produced the Thule Lightning, which has been designed to work with the removable roof on the Koenigsegg Agera R. The carbonfibre box increases the Ageras luggage space from 120 to 420 litres, and is best suited to skis and other winter sports gear.

If you order the sleek storage box to go on your Swedish supercar, youll get a pair of specially designed skis to fit in it, plus the chance to say that you have the worlds fastest production car with a roofbox its 0-60mph time is 2.9 seconds.

The Koenigsegg Agera R and Thule Lightning combination will be revealed at the Geneva motor show tomorrow (March 1).