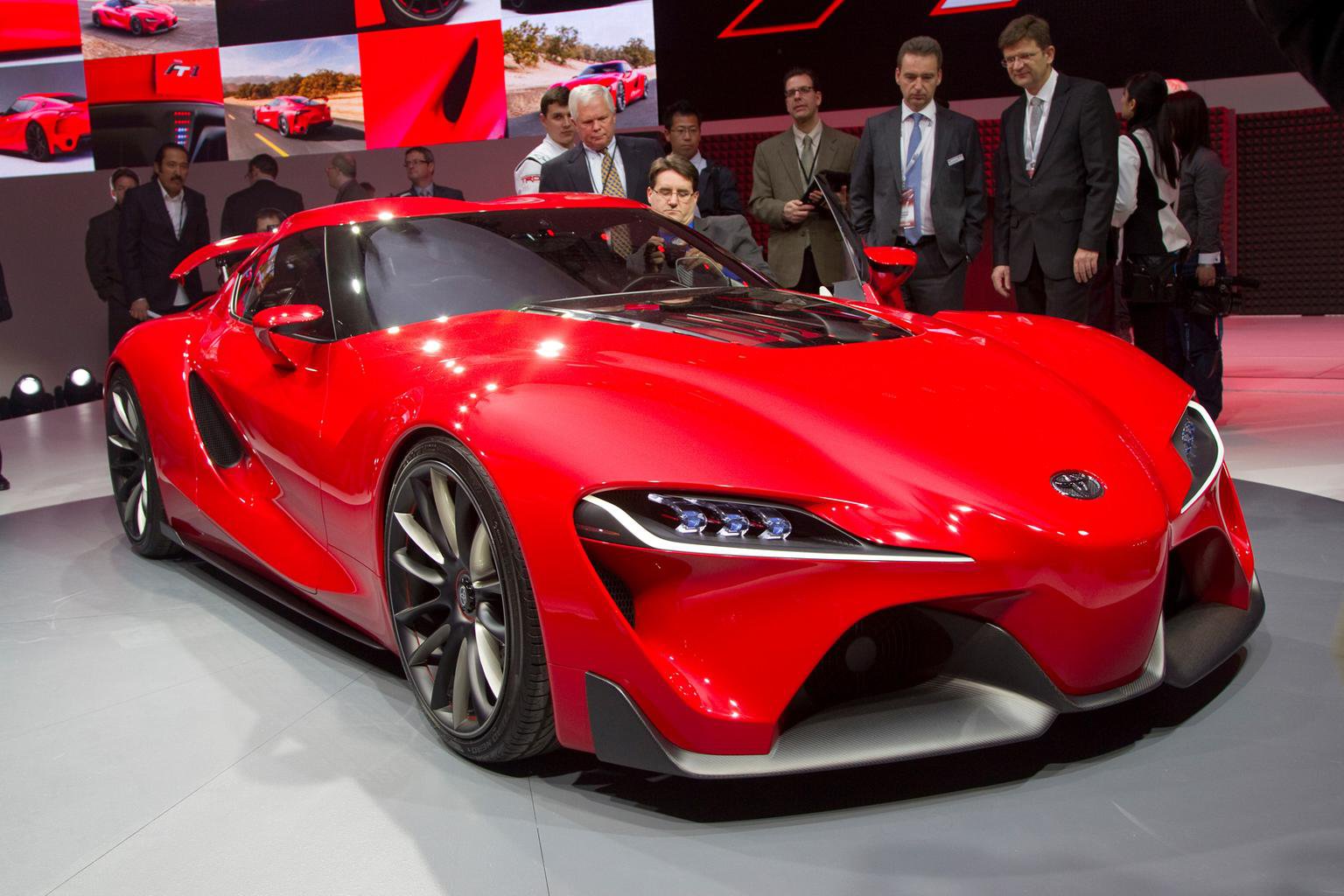 The Detroit motor show has had its ups and downs over the years - and, like the city itself, there's been more depression than delight in recent times, but this year's event was an unqualified triumph. Sure, America's big car manufacturers came out with some heavyweight debuts, but if anything the local offerings were outgunned by enough visitors to make this feel like a truly global motor show (and that hasn't happened for a while).

There were significant production launches, such as the new Mercedes C-Class and Porsche Macan. There were 'strong hints' at production models, like the Audi concept that showed off elements of the next TT, and Volvo's show car, which previewed much of the forthcoming XC90. Oh, and then there were there glorious, unadulterated 'wow factor' offerings such as Kia's GT4 Stinger - a Korean Mustang and Camaro rival - and Toyota's surprise concept, the FT-1.

It all added up to a great show, and a fantastic start to 2014. Here are my highlights.

The biggest launch at Detroit came in the form of the new C-Class; although we actually saw it in a studio a few months back, this was the car's public debut. It drew almost universal praise, particularly for its cabin, which threatens to eclipse not only the 3 Series and A4 but also Merc's own E-Class.

The Mercedes engineers have been clever with the interior design, which stays the classy side of sporty but ramps up the perceived quality; think lots of double-stitched leather and high-quality wood veneers, including a single piece that runs all the way down the centre of the console.

The new C-Class is on sale from the summer. We're still waiting for all the details, but Merc confirmed at Detroit that the cleanest car at launch will be the C220 CDI, which emits just 104g/km of CO2, even with an automatic gearbox. Smaller diesels will follow, and some of them will dip under 100g/km, which is extraordinary for a car of this size and plushness.

The small executive saloon class has been fairly static for a while, with the 3 Series even being pipped by the smaller, cleaner Audi A3 Saloon in our recent awards. We can't wait to find out if the C-Class can deliver on its promise and take the fight back to Audi and BMW.

Ford might have had the new Mustang on its stand - with the promise of right-hand-drive production and UK sales to boot - but Kia stole a march on both the 'Stang and the Chevrolet Camaro with its show car, the GT4 Stinger.

A creation of Kia's Californian design centre, the GT4 Stinger is a rear-drive sports car that manages to ape the great American muscle cars of old, while being faintly modern and even Korean with it. That sounds horrendous but in fact it's anything but; the GT4 Stinger was widely acclaimed at Detroit.

The show car has a 315bhp turbocharged four-cylinder engine, with a six-speed manual transmission. Kia claims the car weighs just 1304kg, so it ought to be able to crack 0-62mph in not much more than five seconds.

Will it make production? Kia design sources were openly suggesting that the car would be on sale within a couple of years, which seems remarkably bold. However, the Korean company is bullish about its American market share, and treading on the toes of Chevrolet and Ford in this area would just be the next phase in its growth. If the reaction at Detroit was anything to go by, the old guard had better be worried.

The Volvo XC90 was unveiled at the Detroit motor show back in 2002, so it's badly in need of replacement (most car models get a full replacement after seven years). That's why the Swedish firm picked the same venue as the original's launch to reveal a strong hint at its successor.

The Concept XC Coupe is a three-door large SUV that's built around the parameters of Volvo's new kit of chassis parts, called SPA and designed to ultimately underpin all Volvos larger than the V40. Of course, the XC90 will revert back to five doors and more conventional SUV stance, but the concept's design language will be carried over. In particular, its treatment around the front end is said to be quite close to how the XC90's set-up will look.

The XC90 will be unveiled in late summer before making its public debut at the Paris motor show in October. It will feature a five-seat layout, although an extra row of seats will be offered, too. There's no denying that it's badly overdue, but judging from the Concept XC Coupe, the Swedes have taken their time and have got it right.

The biggest surprise of the Detroit show? No contest: Toyota's FT-1 sports car concept - and it was an absolute smash hit. In effect a study on how a successor to the old Supra could look, the FT-1 (the FT stands for Future Toyota) is a front-engined, rear-wheel-drive car with just a combustion engine on board; there's no place here for Prius-style hybrid technology.

The FT-1's styling is the work of Toyota's design studio in California, and it takes the much-used idea of 'deeply scalloped surfacing' to new levels. There's hardly a straight edge on the thing, unless you count the decidedly sharp-looking air intakes at the front (there's more than a hint of Le Mans racer about that area). It's a fabulous achievement, though, particularly since it succeeds in making a very long car look surprisingly 'poised' and compact from many angles.

Will Toyota make it? Sadly, no. However, the FT-1 is a design study to take Toyota's styling in a different direction, so we can hope that its dramatic approach will be adopted in some small way on bread-and-butter models, and to a larger extend on some new sports cars. After all, it's already been confirmed that Toyota is working on a hybrid sports car project with BMW.

In the meantime, if you want to drive the FT-1 you'll have to resort to a PS3 controller, your television and your sofa, because it's available as a download on Gran Turismo 6.

Read more on the Toyota FT-1

On the face of it, it's hard to see the significance of Audi's Allroad Shooting Brake, which looks like, well, another slightly revised Audi front end grafted onto an unusually shaped hatchback. However, there are areas of this car which hint strongly at the next TT, which is now only months away.

The highlight of the car doesn't lie in the styling or even the powertrain, which mixes a turbocharged petrol engine driving the front wheels with electric motors and can operated with up to 402bhp or in fully electric mode. It was the cabin, or rather the fascia, that was attracting the greatest attention at Detroit.

Audi has already gone some way towards simplifying the dashboard in the latest A3 - but the Allroad Shooting Brake's layout (and that, one suspects, of the forthcoming TT) goes even further. There's now not even a central screen for elements like the satellite navigation or infotainment; instead, these details are displayed in the main instrument binnacle, right ahead of the driver. The whole panel beyond the steering wheel is a single TFT screen, with a virtual speedometer and rev-counter overlaid on top of the other information.

It's a novel solution - although some may find it odd to, in effect, exclude the front passenger from using the system. It results in a beautifully simple, uncluttered layout in the front of the cabin.

After all that, though, the Allroad Shooting Brake's influence may not stop at the next TT's cabin. A senior Audi source recently hinted that there could yet be scope for a more beefed-up, 'practical' version of the TT, with a raised ride height, hatchback layout and a higher belt line. Remind you of anything?

Pride of place on a Porsche stand dominated otherwise by the forthcoming Macan SUV was given to the 911 Targa, the latest generation of the sports convertible for people who really only want wind-in-their-hair motoring about three days per year.

The Targa is the drop-top that doesn't really drop its top, you see - but this latest generation of the car does it with more style than ever before. The core feature remains: this 911 has a fabric centre roof panel that can be removed. However, the Targa does this electrically, by lifting a centre section from the metal bar that runs behind the front passengers' heads, tipping back the entire rear bodywork and the wraparound rear windscreen, then folding the roof into a Z-shape and tucking it away before putting all of the other bits back into place.

It is, quite frankly, an astonishing piece of engineering, albeit not particularly fast by modern standards at almost 20 seconds, but a joy to behold nonetheless.

That aside, the Targa comes in four-wheel drive only, and with a choice of 3.4- or 3.8-litre six-cylinder petrol engines, and seven-speed manual or dual-clutch transmissions. It won't be cheap, but if the idea of a proper 911 Cabriolet sends shivers down your spine, this could be the best way to enjoy those all-too-rare summer evenings when you want nothing but sky above you.

Read more on the Porsche 911 Targa

Hyundai's range peters out in the UK once you get to the i40 and the Santa Fe, but the Korean brand sells more upmarket models in other countries. The latest offering, the new generation of Genesis, could well make it to Britain.

The Genesis isn't a new model per se; it's reasonably well known as Hyundai's rival for the Audi A6, BMW 5 Series and Mercedes E-Class, although its pricing and standard kit list usually trump those of the established German offerings. That's likely to continue with the car that was unveiled in Detroit.

The new model has neat styling, although if anything it's a bit more 'generic' than the Hyundais we're used to in the UK (particularly around the front end, which appears to have elements from Aston Martin, Audi and Ford).

Still, it's inoffensive enough, and the cabin looks both roomy and nicely finished, with decent materials and a high-definition screen in the centre of the fascia. It's easy to see how it could have appeal, at the right price.

There is a big 'but' in all of this, though: there's no diesel. Hyundai is planning to sell the Genesis with only petrol power - a 3.8-litre V6 engine (311bhp) or a 5.0-litre V8 (420bhp). Small wonder, then, that the UK division will only sell a handful of these things when it goes on sale later this year. However, it is a start, and you can bet that the next generation of Genesis will have even more of Europe's demands in its sights.

It wouldn't be an American show without a truck or three - by which I mean pick-ups - and the Ford F-F150 is about as big as they get in terms of sales volumes (they shifted more than 750,000 of the things last year alone). The '2015 model year edition' made its debut at Detroit - and showed that even buyers of this most enormous of vehicles are starting to consider the environment (and fuel prices).

The new F-150 gets a turbocharged 2.7-litre Ecoboost petrol engine (alongside the V6 and V8 editions, naturally), sheds around a third of a tonne in weight thanks to greater use of aluminium, and introduces fuel-saving measures like stop-start and an 'active' front grille that closes its shutters to help reduce aerodynamic drag.

Is it ready to come to Europe? Even with the improved fuel economy, the sheer scale of the thing makes it hard to envisage in even the vast open countryside, let alone as a right-hand-drive edition on Britain's busy roads. Still, Ford's policy is to push as many of its models into different regions as possible so don't rule it out.