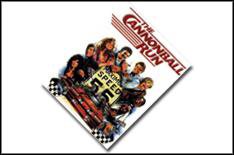 The Cannonball Run
It might not be an Oscar-winner, but some would say it's the defining car-chase movie of all time.

Based on a real event, it's a comedy following an eclectic bunch of oddballs in mad, modified cars all trying to win a cross-America road race.

This movie is the perfect stocking-filler for the petrolhead in your life.
Price: 2.99
From: Play.com

The Italian Job
It might be more than four decades since it first hit the silver screen, but it also remains one of the finest car-based movies ever released. Who could ever tire of Michael Caines Charlie Croker and his plundering mob of Mini Cooper-powered crooks? A timeless present, we'd say.
Price: 3.99
From: Amazon.co.uk
British Rally Championship 2010
With six drivers still in contention going into the final round, this year's BRC delivered one of its most exciting climaxes ever. This official review includes comprehensive coverage from all six rounds. From the Kielder Forest to the title-deciding rounds in Yorkshire, this DVD has it all.
Price: 19.99
From: Dukevideo.com
British Touring Car Championship 2010
A two-disc review of the 2010 British Touring Car Championship could well prove a welcome tonic to the Christmas TV schedule. With nine different winners and 30 action-packed races to watch, there's enough bumper-to-bumper racing to satisfy anyone's automotive appetite. It all culminates with a four-way title shoot-out at Brands Hatch.
Price: 19.99
From: Dukevideo.com
Cars
With rookie race car Lightning McQueen marooned in the small town of Radiator Springs, it's the original outing of everyone's favourite animated autos. Can the inexperienced racer learn the ways of the road and make himself a better car? The perfect stocking-filler for any junior speed-freak.
Price: 6.99
From: Play.com
Grand Prix
It's Formula One '60s style, as the racers battle each other and their own demons while they strive to reach the ultimate goal of becoming world champion. Starring James Garner, Grand Prix is widely considered to be the best-ever motorsport film. Look and marvel at the heady days when overtaking was still considered an integral part of Formula One. It's available as a two-disc special-edition version.
Price: 37.99
From: Amazon.co.uk
The Nissan GT-R Legend
The first Japanese Supercar, Skyline GT-R R32, was offered for sale in Japan and Britain only, yet had a worldwide reputation because of the Gran Turismo computer game. This DVD looks at the original R32 and drives it back-to-back with the latest R35. Plus, Gran Turismo creator and gaming legend Kazanori Yamauchi explains why the GT-R has won such a special place in the affection of gamers, drifters and street-racers.
Price: 16.99
From: Dukevideo.com
Back To The Future
You probably won't need much introduction to this one. It stars two 1980s icons Michael J. Fox and a DeLorean sports car. If you're one of the few people in the civilised world who hasn't already seen it, you'll probably have guessed from the title that time travel is a big part of the plot. Buy the complete trilogy here
Price: 17.99
From: Play.com
The Mini
Most people know a Mini-lover, so this DVD should be the perfect addition to their stocking. It explores the unique long-lasting appeal of the UK's most iconic car from its inception in 1959 right through to its second-coming with the launch of the new Mini. Motorsport and in-car experiences are also included.
Price: 16.99
From: Dukevideo.com
Driving Test DVD
Not the most exhilarating of road movies perhaps, but for the budding driver this could be a most welcome addition to the stocking. Learner Driver DVD is designed for UK-based pupils from novice to accomplished driver level. Try before you buy with trailers at www.drivingtestdvd.com.
Price: 22.99
From: Amazon.co.uk