* 08 registrations cause concern * Some plates deemed too rude * Acceptable plates on the road from March 1... 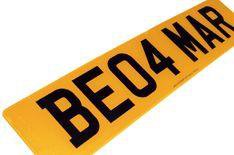 Driver and Vehicle Licensing Agency officials have withdrawn some car registration plates because they are deemed too rude to be released this March.

These include BO08 LES, which they say could cause offence to women, and anything in the sequence beginning KN08.

Potentially provocative phrases such as RU08 ENT have also been banned.

In addition, concerns that the 8 could look like an S from a distance have also led to the sequences beginning 08 HAG, 08 LAG and 08 LUT being removed.

Cars with the 08 prefix will be on the road from March 1.