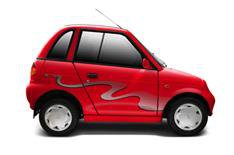 The Government has announced plans that it hopes will kick-start an electric car revolution in the UK.

Details of the scheme to promote low carbon transport over the next five years have been announced today by transport secretary Geoff Hoon and business secretary Lord Mandelson.

As part of a 250m iniative to help slash carbon emissions, car buyers will be offered grants of between 2000 and 5000 to buy a car that runs entirely, or for the vast majority of the time, on electricity.

To be eligible cars would need to meet modern safety standards and have a range and top speed sufficient to give mass market appeal. The Government expects such models to hit showrooms from 2011 onwards.

Geoff Hoon said: 'Cutting road transport CO2 emissions is a key element to tackling climate change. Less than 0.1% of the UK's 26 million cars are electric, so there is a huge untapped potential to reduce emissions.

'The scale of incentives we're announcing today will mean that an electric car is a real option for motorists as well as helping to make the UK a world leader in low carbon transport.'

As part of the plans, the Government will also spend 20m creating the infrastructure to support electric cars in key cities and allowing drivers to try electric cars. It will also make up to 100m available to aid research and boost manufacturing in the UK.