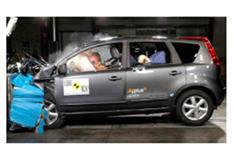 Safety organisation Euro NCAP will award a maximum five-star rating only to cars fitted with stability control as standard.

The decision is part of a raft of changes to the organisation's safety tests, which are designed to make the process harder. These include whiplash testing, for which the first results are due to be made public later this month.

In addition, from next year cars will be given a single star rating out of five, rather than being rated separately on adult, child and pedestrian protection.

However, the score will be calculated following tests on the same three areas, plus a new one that has been called 'Safety Assist'.

Safety Assist will allow Euro NCAP to consider driver assistance systems and safety equipment that help avoid accidents and reduce the risk of injury. As part of this assessment, Euro NCAP has ruled that only models with stability control fitted to the majority of variants will be eligible to score an overall five star rating.

The first results of tests carried out under the new system will be made public in February 2009.

Although only the final rating will be publicised, individual points scores for the four tests will still be made available so that car buyers can compare safety ratings in different areas.