* Among the most expensive places to shop * Find out the figures, here * How to beat the rip-off prices... 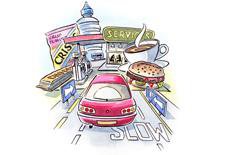 Food and drink
So, you think youre being ripped-off when you fill-up with fuel on the motorway?

Then youll be even more furious at the price of most food and drink. We shopped for seven items in the WH Smith branches of 10 services stations by far the most common newsagent in Britains motorway services and found prices were between 3% and 91% higher than on the high street.

We also shopped for five items in M&S Simply Food, and found that prices were between 7% and 25% higher on the motorway. Coffee and fast food also carried a hefty premium.

WH Smith says its motorway service branches are franchises, and that because of this it doesnt have control over pricing. We got a similar line from other companies, including M&S and Burger King. So, we asked the service station operators why food and drink is so much more expensive than on the high street.

Roadchef said: It isnt reasonable to compare high street prices with those at motorway services. Service areas are situated in remote locations and have extended opening hours, so the costs associated with running the retail outlets are higher than on the high street or in a supermarket.

Moto said that motorway service areas cost in the region of 25 million to build, and that it has to claw back this money somehow. It also said that it has to pay for the upkeep of the entire services area including the slip { roads, which in other countries are paid for by the state and pointed out that its car parks, picnic areas, toilets and changing rooms are free for everyone to use. Staffing costs are higher, too, because service stations are required by law to be open 24 hours a day.

The AA takes issue with this. Paul Watters, head of Road Policy, said: Facilities and quality have improved over the years, and they do cost a lot to run. However, Britains motorway services are still too expensive, and we dont think tired drivers should be deterred from stopping for a break by high prices.

Many drivers are already wary of being ripped off; a recent survey by market research company Mintel revealed that only 42% buy any food and drink when
they stop on the motorway.

Given that an estimated 260 million drivers stop at services areas each year, that means operators Moto, Welcome Break and Roadchef are failing to persuade around 150 million of these to part with any cash whatsoever. Surely, then, theyd be better off reducing prices, and making a smaller profit on a much greater number of sales?

Surprisingly, Moto thinks not. A spokesman said, We dont think lowering prices would increase sales. Many of the drivers who stop at our service stations
have no intention of making a purchase, and we dont think cheaper prices would change this.