* DAB standard across range in 2012 * One year before industry deadline * Focus gets DAB as standard now... 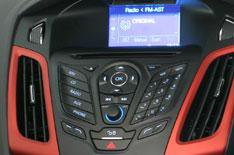 Ford has pledged to make DAB digital radios standard across its range by the end of 2012 one year earlier than the industry-wide agreement.

The new Ford Focus has been launched with DAB radio as standard, because Ford believes it will tempt buyers who are wary of the mooted 2015 date for all FM broadcasts to be ended. It now plans to extend that policy.

'It is a looming issue, and we want to be well placed,' said Ford of Great Britain managing director Nigel Sharp. 'The fact is that the Focus's radio is future-proofed now, whereas those in our competitors' cars aren't.

'The plan is to extend that across every Ford model in the next 18 months or so. There are technical issues to overcome because, for instance, traffic alerts are broadcast only in FM at the moment, but we are confident we can achieve our goal.'