* Ford celebrates 100 years in Britain * A photo a week from Ford's archive * This week a flying Transit van... 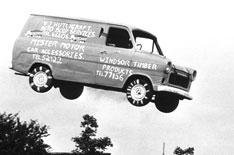 Ford is celebrating 100 years in Britain by delving into its archive of photographs.

This week we see how a Ford Transit flew throw the air with the greatest of ease to raise money for charity in 1985.

We're not sure if the landing was as smooth as the flight, but Ford says the only modifications to the van were thought to be the removal of the glass and some gaffer tape around the bonnet.

See the picture in full
Click here for a larger version of the photograph.

Missed the other pictures?
Click here to see last week's picture of Ford testing cars before the era of wireless communication.