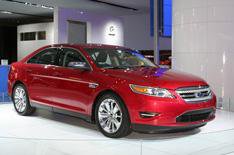 Some people think that where America leads, Europe follows.

So here's a picture to prove them wrong.

The Ford Taurus is a family-sized saloon on sale in America only. However, this new model unveiled in Detroit has more than a ring of the Mondeo about it for very good reasons.

Its chiselled shape is a radical design departure from the old Taurus' looks, and it follows the overwhelmingly positive response to Ford's Mondeo.

Another point of note is that it's powered by Ford's new EcoBoost V6. It's part of a range of Ford engines designed to allow American's to keep V8 levels of performance without destroying the planet in the process.

The Taurus is scheduled to go on sale this autumn.