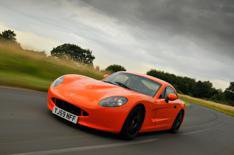 What is it? Its a small, stripped-out two-seater, which Ginetta says has been designed let owners drive it to a racetrack at weekends, give it a good workout, and then drive home again.

That makes the G40R quicker than a Lotus Elise its closest natural rival and because its engine is surprisingly flexible, you dont need to thrash it to make rapid progress.

The steering has no power assistance and is phenomenally direct and accurate. Combined with a lively chassis and a slick six-speed gearbox, the Ginetta offers a rawer and more engaging driving experience than almost any other road car, although the heavy steering, clutch and brakes are a nuisance a low speeds.

A combination of a sports exhaust and practically no sound deadening make the cabin noisy at tickover and deafening at high revs, but this all adds to the experience when youre in the mood which youll need to be a lot of the time if youre serious about buying a G40R.

Whats it like inside? To get in you have to clamber feet-first though a stubby door and over the bars of a roll cage, but once inside there are enough adjustments in the seat and steering wheel for most drivers to make themselves comfortable.

Ginetta says the G40R is a racing car for the road, and it certainly feels that way from the drivers seat. The cabin is stripped-out to the extreme, with a couple of racing bucket seats, a tiny sports steering wheel and a few metal buttons on the centre of the dashboard your only companions. Forget about a radio or electric windows although you can have air-conditioning for an extra 1000.

There are no airbags, but Ginetta insists safety hasnt been forgotten about, and points to the countless accidents that Ginetta racing drivers walk away from every weekend.
An unexpected bonus is the 200 litres of boot space enough for a set of golf clubs and nearly twice the space in an Elise.

Should I buy one? Ginetta is keen to distance itself from its kit car past, and theres no doubt the G40R is a more practical, sensible and safer albeit pricier alternative to a Caterham 7.

However, the G40R still feels decidedly handmade and not in a good way. The plastic doors flap shut rather than close with a thud and most of the panels fit poorly. Factor in a starting price of 29,950 1850 more than a Lotus Elise and the G40Rs appeal drops several levels. Just as well Ginetta plans to build only 100 a year.

If youre buying primarily with road driving in mind, look elsewhere. If you plan to spend a fair few of your weekends at the track, the G40R is worth a test drive.
What Car? says