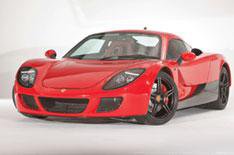 This is the Ginetta G60, the company's new flagship model that will cost from 68,000.

The G60 is based on Ginettas previous F400 model, which in-turn was a re-badged version of the Farbio GTS400. Ginetta bought Farbio earlier this year.

The G60 has a number of significant changes over the F400. The basic body shape and carbonfibre tub remain the same, but there are new vents, splitters and front- and rear light lenses.

Underneath the skin, theres a new steel chassis, 310bhp 3.7-litre V6 engine, clutch and differential. Ginetta quotes a 0-60mph time of 4.9 seconds and a top speed of more than 165mph. Average economy is an impressive 31.0mpg.

The G60's weight has been significantly reduced compared with the F400, thanks to the removal of servo brakes, power-assisted steering, anti-lock brakes and traction control.

The driving position has been improved with realigned pedals, and the cabin also gets a new touch-screen system, dashboard design and electric window mechanism.

The G60 follows the launch of the company's G40R, which we reviewed in August.

First deliveries of the G60 are expected in February 2012.