More for you |
Most and least reliable family carsWhat to do if you put the wrong fuel in your carVolkswagen Passat GTE long-term test reviewNew issue of What Car? magazine on sale nowTrue MPG: most efficient SUVs
Home
News
Good for business - and cutomers?
news

Good for business - and cutomers?

* Do they offer peace of mind? * Or are they a false comfort? * What Car? investigates... 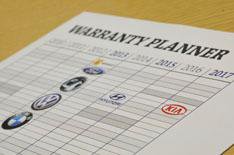 The car industry has tried all sorts of ways to woo customers during the recession, such as big discounts and low-rate finance. Kia has taken a different approach, extending its seven-year warranty to its entire model line-up.

Customers seem to like the added confidence of a long warranty, too. In a recent What Car? survey, 56% of respondents said Kias seven-year warranty attracted them to the brand 24% said it was a major influence, and 32% said it attracted them at least a little.

Good for business
Kias January sales looked pretty good, too up 200% compared with the same month in 2009. Kia credits the scrappage scheme and some new models for part of this, but it seems the promise of seven-year warranty has enticed buyers hoping to save cash in the long run.

Yet extra-long warranties are nothing new. Back in the 1990s, when one-year warranties were the norm, the likes of Honda, Nissan and Toyota offered three years cover. Then, in 2002, Hyundai moved the game on by putting a five-year warranty on its cars.

Kias warranty, which is effective up to 100,000 miles, covers manufacturing faults and defects for a longer period than most car makers. The idea of many years of worry-free motoring is clearly a big draw, but are customers getting the cover they expect?

As with all car manufacturer warranties, Kias cover doesnt include wear-and-tear items, so customers are mistaken if they expect everything to be covered.