More for you |
Most and least reliable small SUVsRevealed: the car makers whose discounts have got bigger since lockdownHyundai Ioniq Electric long-term test reviewTop 10 used MPVs for less than £10,000What Car?'s best hot hatches 2020 (and the ones to avoid)
Home
News
Government unveils 24m eco grants
news 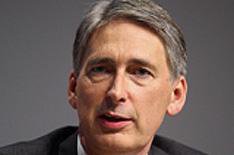 Transport secretary Philip Hammond unveiled 24 million of new grants for low-carbon-vehicle projects today and spoke to whatcar.com about the prospects for low-carbon car ownership in the UK.

Talking to us at the Low Carbon Vehicle Conference, Hammond said: 'We can have private car ownership, but it's got to be low- or zero-carbon. It's not a veiled threat, it's a statement of the blindingly obvious.'

For many types of travel there's the familiar refrain of encouraging the use of trains between major cities and promoting walking and cycling around urban areas.

That all makes sense, but Hammond understands the car will remain impossible to beat for complex point-to-point journeys and gave the conference his slogan 'it's not the car that's the problem, it's the carbon.'

That's why, Hammond said, the Government took the unique decision ahead of the next month's comprehensive spending review to commit to spending 43 million on grants for electric cars, plug-in hybrids and fuel-cells up to March 2012.

Government predicts switch to electric cars
There's no decision on whether there'll be more cash after that, and Hammond didn't write the 800 million cheque the Committee on Climate Change wants to kick-start the market, but Hammond is convinced buyers themselves will soon want to switch for economical reasons, despite the current high price of EVs and plug-ins.

'It's clear that we're heading in the direction where the environmental and business case for the purchase of these vehicles will point in the same direction.

How soon we may reach this point is complex, but it clearly hinges on retained values, the single biggest component of whole-life costs. That, in turn, rests on the retained value of batteries, the most expensive component of electric cars by far.

There is little, if any, consensus or data on how much batteries may be worth after three, five or 10 years of use, so how can Hammond by so confident electric cars will make financial sense?

'Residual value is critically important. Fleets, rental companies and all the major compares are very much focused on the challenge of residual value,' said Hammond, adding that manufacturers would have to work to 'support' them. Watch this space.

Tax does have to be taxing
Under current tax regimes, the Government stands to lose a huge amount of revenue from petrol pumps, vehicle excise duty and company car tax if there is a big market shift to low-carbon vehicles.

Eventually, the Government will lose a huge amount of tax revenue from petrol pumps, vehicle excise duty and company car tax, so a restructuring will eventually be necessary, said Hammond, but not for the next '15 to 20 years.'

Thankfully for Hammond, perhaps, the question of taxing low- or zero-carbon vehicles 'is not for this parliament, the next one or even the one after that.'

Grants
Six projects will receive the 24 million in funding from the Technology Strategy Board. A joint project between Nissan, Lotus and Jaguar Land Rover to develop new engines for plug-in hybrids was one successful bid along with a project to develop lighter weight materials and another to use thermal energy to improve performance.