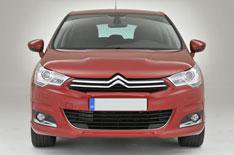 The new C4 is based on the Peugeot-Citroen (PSA) mid-sized car architecture, known internally as platform two. It's been used for a host of cars from the current C4 (and the C4 Picasso and Grand Picasso) to Peugeot's 308 range, the 3008 crossover and even the RC-Z coupe.

It's been tweaked, though, in an effort to give the car that feather-bed ride that was always a Citroen characteristic before the company lost its way and its individuality in the 1990s.

Fortunately, recent new offerings seem to suggest that Citroen is back on track, but without some of the eccentricities that it used to inflict on buyers.

The fixed steering wheel hub on the current car has been ditched in an attempt to introduce a greater sense of normality: it made the instruments more visible when you weren't driving in a straight line, but apparently added weight, which all manufacturers are now trying to reduce.

The new C4 is no heavier than the current one, despite being longer, wider and taller and offering more equipment.

By using platform two as a base and with no increase in wheelbase Citroen has denied itself the chance to improve passenger space in the switch from current to new C4.

It's pretty average for the class, but foot space in the rear is poor, and if you go for the full-length glass sunroof there's not much headroom to spare, either. At least your bags will be able to stretch out: the 408-litre boot is claimed to be the biggest in any family hatch, and there's hardly any lip to heave them over.