More for you |
Most and least reliable small SUVsRevealed: the car makers whose discounts have got bigger since lockdownHyundai Ioniq Electric long-term test reviewTop 10 used MPVs for less than £10,000What Car?'s best hot hatches 2020 (and the ones to avoid)
Home
News
Hollywood star is emission-free
news 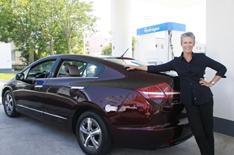 Curtis, the daughter of well-known actors Tony Curtis and Janet Leigh and star of films including A Fish Called Wanda, Trading Places and Halloween, is among 200 motorists in California, USA and Japan to sign up to lease one of the cars.

The FCX Clarity is driven by an electric motor that runs on electricity generated by a hydrogen-powered fuel cell, and is billed as a zero emissions vehicle because its only emissions are heat and water.

It's motor has 134bhp, 189lb ft of pulling power, 100mph top speed and a 270-mile range. Honda says its fuel efficiency is three times that of a modern petrol engine.

'I really wasnt expecting it to be so luxurious,' said Curtis. 'I love the interior layout, design and access to controls. It is user friendly and very modern.'

Lease costs for the car are reported to be around 290 a month.