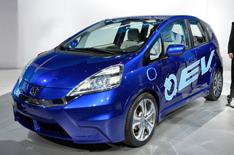 Honda revealed the next stages in its car electrification programme at the Los Angeles show a battery-powered version of the Jazz (known as the Fit in America and Japan) plus a new platform for medium and large plug-in hybrids then denied it was a late starter in jumping aboard the EV bandwagon.

Chief executive Takanobu Ito said that as long ago as the LA show of 1987 Honda had unveiled a purpose-built small electric car, EV+, and had put 300 on trial with real people in the 1990s, but the tests were discontinued due to the lack of a realistic recharging infrastructure. Honda then embarked on developing hybrids and hydrogen fuel-cell cars.

For Honda, the progress of electrification never stopped but we shifted to hybrids as a bridge, Ito added. Now society may be ready to begin crossing the bridge to battery electric vehicles. We must advance from using less petroleum to no petroleum and from fewer CO2 emissions to no CO2 emissions.

The all-electric Jazz will go on sale in 2012 and will lose none of the petrol versions passenger space, said Ito. It will have a range of up to 100 miles on a charge and borrow the three-mode drive system (Normal, Economy and Sport) from the CR-Z hybrid.

The new mid-sized hybrid platform will underpin a variety of cars, probably starting with the CR-X crossover, although it is not certain how many of them will come to Europe. It will be more beneficial in other areas of the world where the antipathy to diesel still exists.