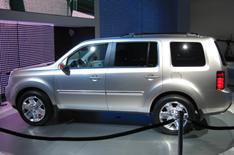 They say America likes everything to be supersized, and the updated Honda Pilot is no exception.

The eight-seater Pilot Prototype on show is said to be extremely close in specification to the restyled car that will go on sale in the summer of this year although it won't be available in Europe.

Surprisingly, the car is considered only to be mid-sized in the States, which goes some way to underling just how far the green movement still has to go in the country.

Modifications to the Pilot focus on improving safety and fuel efficiency, according to Honda.

Elsewhere, Honda is emphasising its green credentials by displaying the FCX Clarity fuel cell car, which will go on sale this year, and CRZ hybrid sports car, which will make production next year.

They were previously seen at the Tokyo and Los Angeles motor shows in 2007, and they form part of Honda's goal of making 10% of its sales hybrids by 2010.