More for you |
The most popular used car reviews of 2020LISTEN: Car of the Year PodcastNew issue of What Car? magazine on sale nowPromoted | 5 reasons why it makes sense to go electric todayBig savings on our Car of the Year Awards winners
Home
News
Honda plans hybrid expansion
news

* New five-door next spring * Sporty CR-Z on the way, too * New Civic and Jazz hybrids... 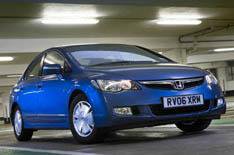 Honda will launch an all-new hybrid car in the UK next spring, with the stated aim of making the eco-friendly technology 'more affordable'.

Although no technical details of the new hybrid have been released, Honda has revealed that the car will be a five-door model offering good fuel-efficiency, manoeuvrability, comfort and styling. It expects to sell 200,000 of the cars a year globally.

It says it can reduce costs by utilising a newly developed control unit, and a battery that is lighter and more compact than those currently used. A thinner motor is also being produced to save weight.

As a result, the car will be built on a completely new platform, allowing Honda to reposition the hybrid control unit and battery underneath the boot.

Honda has also shown its intention to dramatically increase its hybrid model range in the future, by introducing a sporty hybrid car based on its CR-Z Concept, an all-new Civic Hybrid and the addition of a hybrid Jazz model.

No timescale has been put on the introduction of these models, but Honda says it expects their arrival to accelerate sales of hybrid models dramatically to 500,000 cars a year.