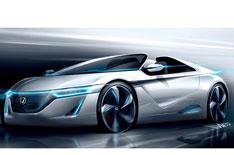 Honda will unveil three concept cars at the Tokyo motor show next month, with the most eye-catching being this Small Sports EV Concept car.

'Our recent efforts have been focused on fuel-efficiency, and that perhaps gives the impression Honda is behind with pushing the brand image of sportiness, but let me assure you that is not the case,' said Ito. 'We will address that impression with our new generations of cars.'

While the Small Sport EV Concept is electric-powered only, Honda has previously stated an interest in making a hybrid sports car to rival the Porsche Boxster. Whether the open-top concept car at Tokyo could become that Boxster-rival remains to be seen.

Also on show will be Honda's AC-X plug-in hybrid. Again, details are sketchy but Honda is keen to emphasise the car's long-distance abilities. More details will be revealed at the show.

The last of the three concept cars is the Micro Commuter Concept city car. Honda says it could offer 'a highly accessible form of mobility for more people'. Honda is also showing a Motor Combo concept electric bike at Tokyo, which can slot inside the Micro Commuter.