How green are electric cars really?

With the popularity of electric cars growing by the day, we take a closer look at their overall impact on the environment to see if they’re actually any better than cars that run on fossil fuels...

There's a common perception that electric cars are kinder to the environment than regular petrol and diesel models, because they don’t run on fossil fuels and don’t put out any CO2 – the rising level of which is the biggest contributor to climate change.

On a local level, they can take some credit for improving air quality, especially in big cities, and the subsequent reduction in harmful particulates and fumes in the atmosphere can have health benefits for all of us. In addition, because they’re quieter than most conventionally powered vehicles, they’re able to help reduce noise pollution, making any urban environment a nicer place to be.

But how green are electric vehicles (EVs) in reality? There’s ongoing debate over their long-term sustainability, especially with regard to the production process and what happens to batteries at the end of their usable life. These are grey areas, because EVs are still comparatively new to our roads; the first mass-produced EV to be sold in the UK, the Nissan Leaf, has been around only since 2011.

So, here we’re going to look at the environmental impact of an EV throughout its life, while also comparing it with a combustion-engined equivalent. 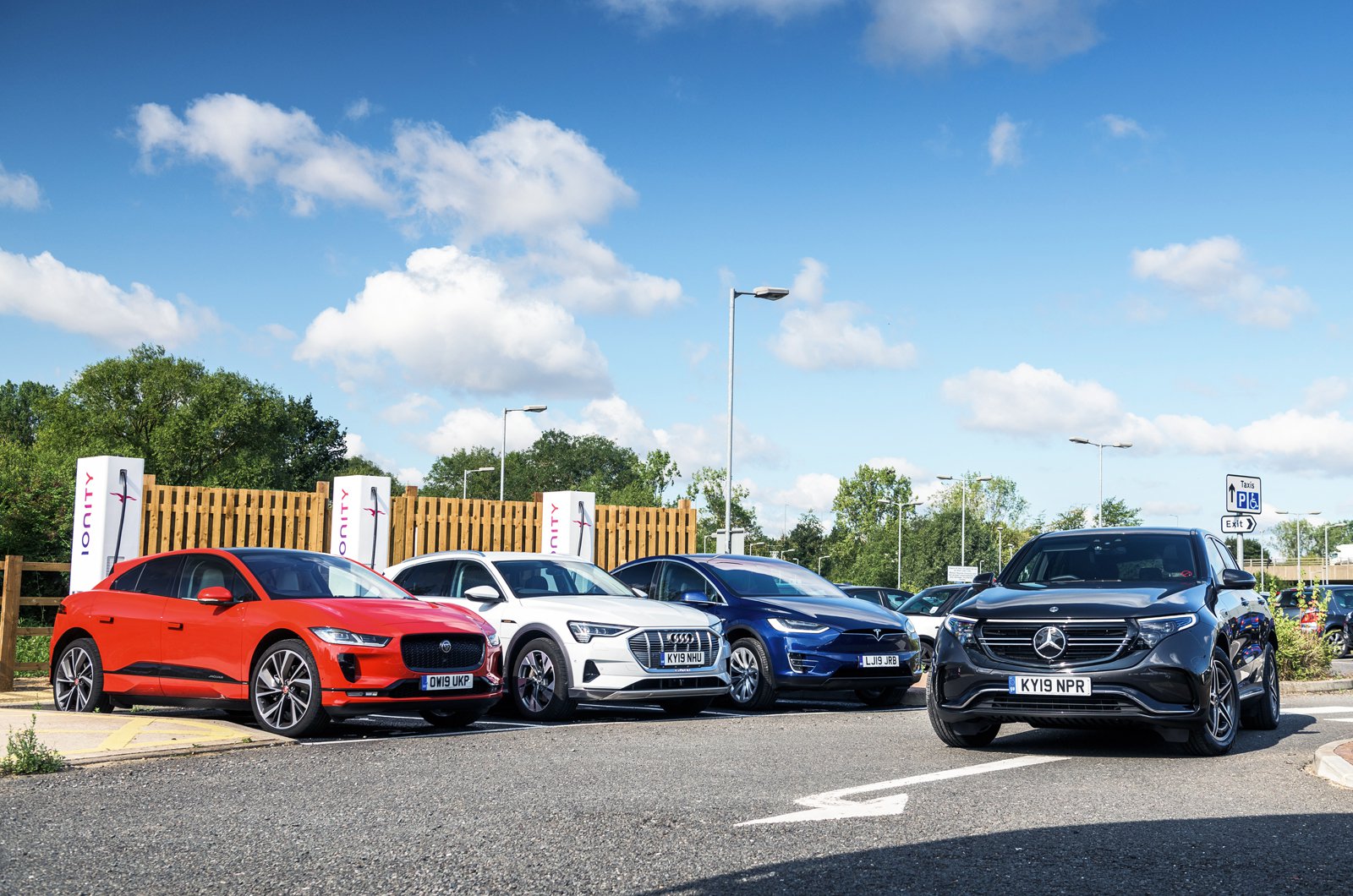 How eco-friendly is the production process of an electric car?

Nearly all EVs use lithium ion batteries to store energy. A lithium ion NCA (nickel cobalt aluminium oxide) battery is one of the best-performing variants, and as its name suggests, it’s made of up of several rare earth materials – all of which require mining and extracting.

These materials are often sourced from different countries, and this can result in emissions from the supply chain. What’s more, some of these rare earth materials are finite – in other words, non-renewable.

Generally speaking, the larger the battery, the more rare earth materials are required. However, the technology is improving and batteries are becoming smaller yet more efficient, thus reducing their environmental impact and improving the range they can offer. 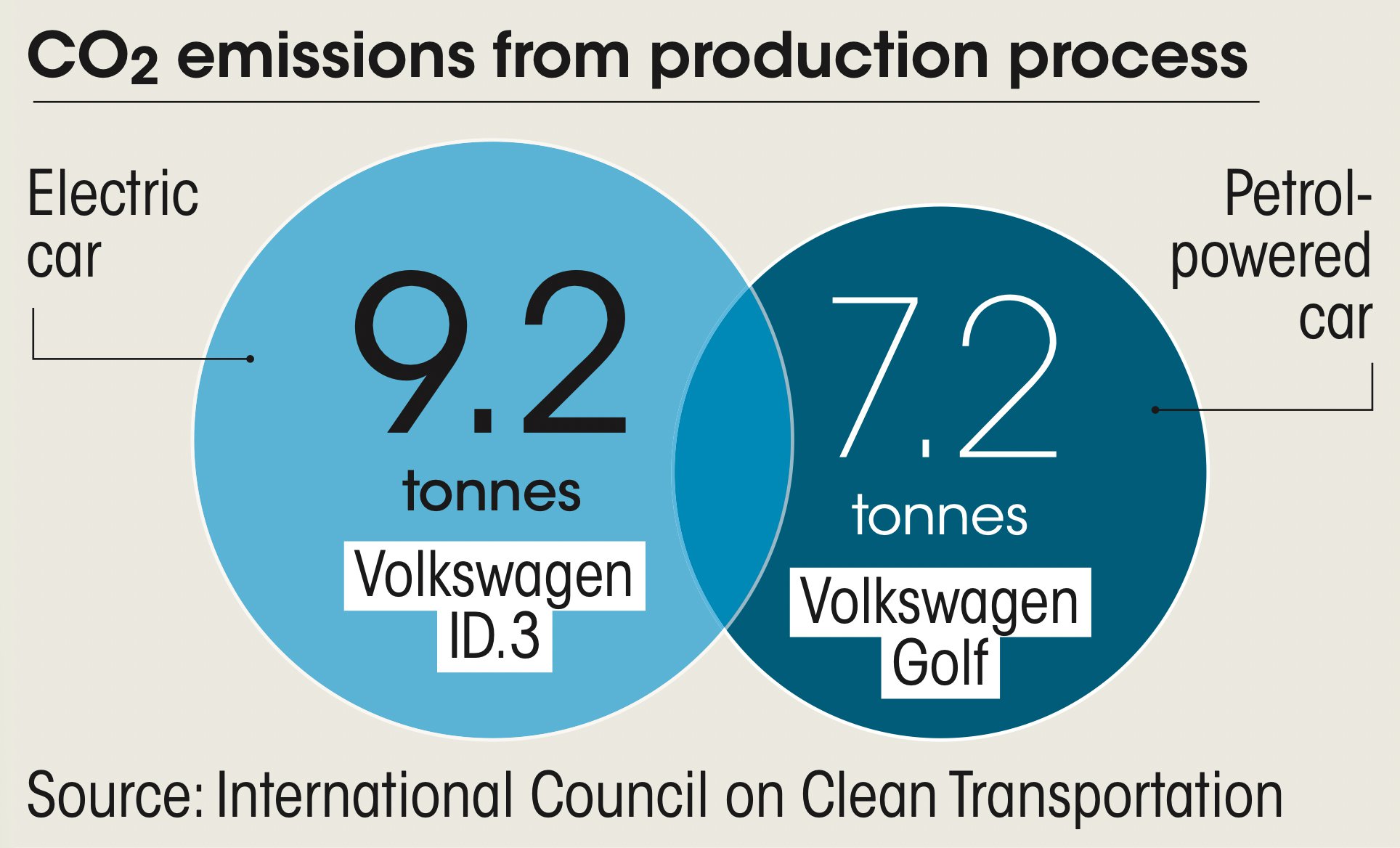 An analysis by the International Council on Clean Transportation (ICCT) revealed that a combustion-engined car like a Volkswagen Golf causes around 7.2 tonnes of carbon emissions during its production process. In comparison, a similar-sized EV, such as a Volkswagen ID.3, causes around 9.2 tonnes. As a result, the ICCT calculated that the EV in the UK would have to drive an extra 7061 miles to catch up with the Golf – the equivalent of about a year of driving.

But what about the rest of the components? All cars, whether they’re electric or not, are made up of multiple materials, including metals, plastics, fabrics, glass and rubber. These materials have production and supply chain-related emissions, and many manufacturers still use materials that are non-recyclable.

However, this is starting to improve as companies aim to reach ‘net zero’ – in other words, offsetting any emissions by removing an equal amount from the atmosphere. Volvo intends to be entirely carbon neutral by 2040; Audi and several others have a target of 2050. As part of that process, for example, recycled plastic bottles (which are then ground up into a polyester yarn) are already being used for 89% of the seat material in the Audi A3 family car. 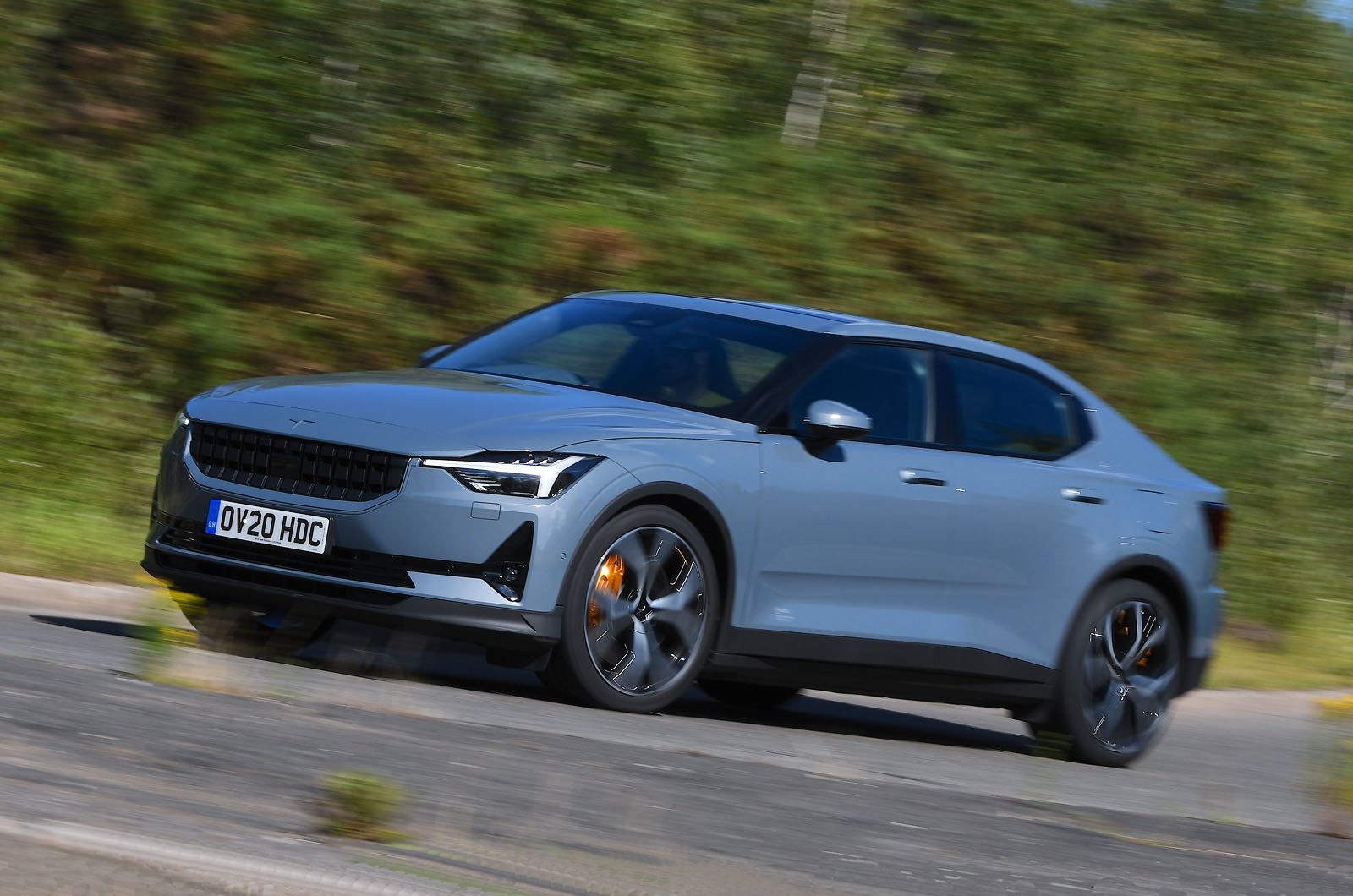 Polestar, meanwhile, has a ‘Life Cycle Assessment’ (LCA) for its latest car, the electric Polestar 2. This reveals the car’s lifetime carbon footprint, covering emissions from materials production, manufacturing and logistics, use and end of life (the latter referring to what happens when a car reaches the end of its serviceable lifespan).

At the end of its life, is an electric car more difficult to recycle than a petrol or diesel equivalent?

The End of Life Vehicle Directive, which was first set out by the European Union in 1997 to help address vehicle waste, clarifies that cars which are too old to be repaired economically, have been too badly damaged in an accident, or simply aren’t worth anything, are classed as End of Life Vehicles (ELVs). Since 2015, the directive (which also applies to the UK) has stated that 95% of an ELV by weight must be reused, recycled or recovered.

Neil Joslin, chief operating officer at recycling specialist Charles Trent, says EVs are actually more straightforward to recycle in one respect, but very similar to combustion-engined cars in another. 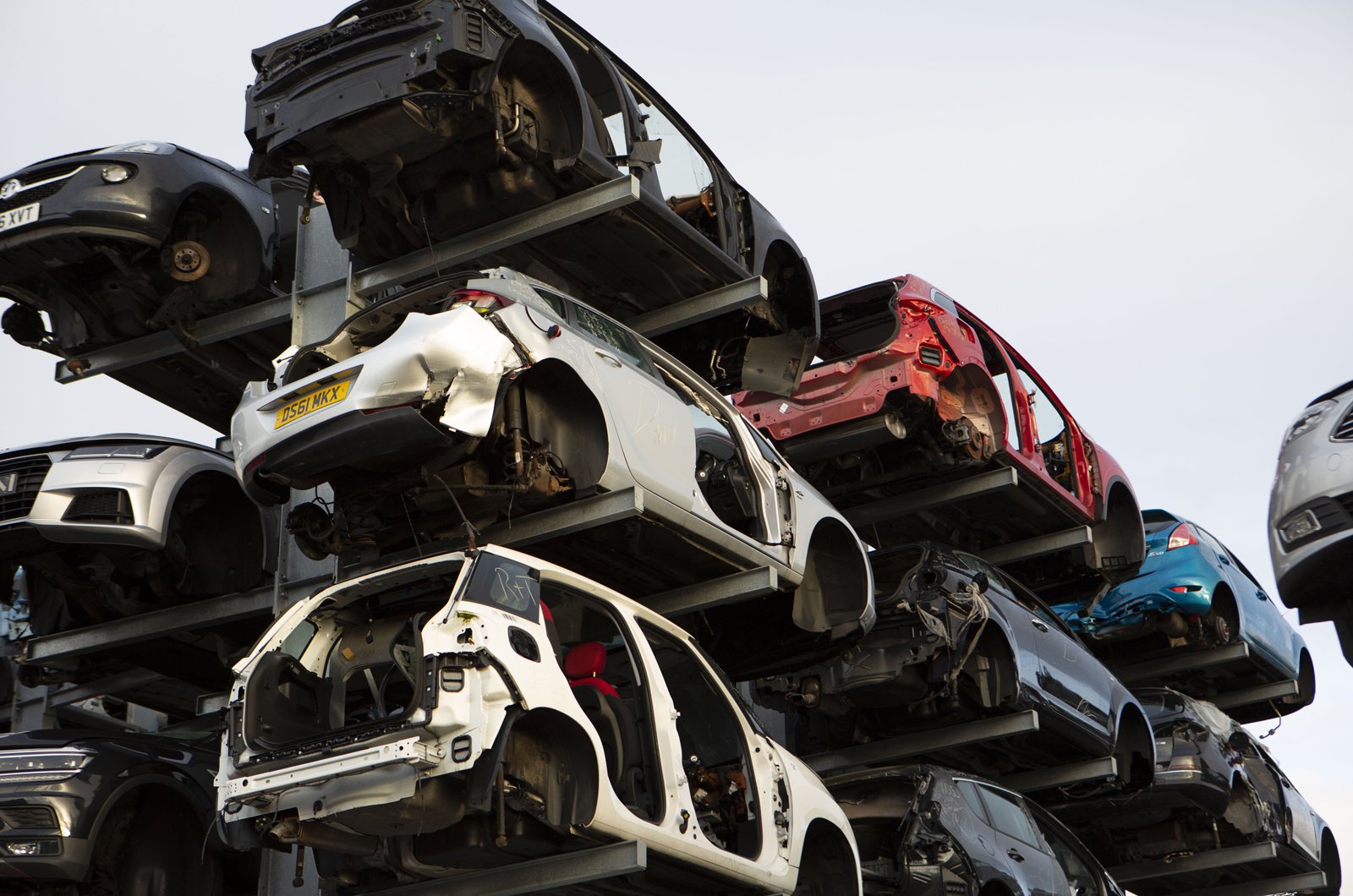 “The biggest thing with an EV is isolating the power,” he says. “Once you’ve isolated the power and the vehicle is safe to work on, it still has four wheels, bumpers and a bonnet – everything a petrol or diesel car would have.

“What it doesn’t have is a dirty petrol or diesel engine with all the fluids going around it. So that’s why it’s a little easier, because we don’t need to depollute the vehicle.”

Then there’s the issue of plastic, which is still widely used in the motor industry, despite the fact that much of it isn’t recyclable. “Plastics make up quite a bit of car construction,” says Joslin. “Not by weight, but in terms of the interior of the car; plastics are everywhere. But manufacturers are getting better [at using more sustainable materials instead].”

Most ELVs are dismantled for parts, which are then sold individually. Or, if there is no value in the parts, the entire car is depolluted and then crushed into a bale. The materials are then shredded, separated and recycled. 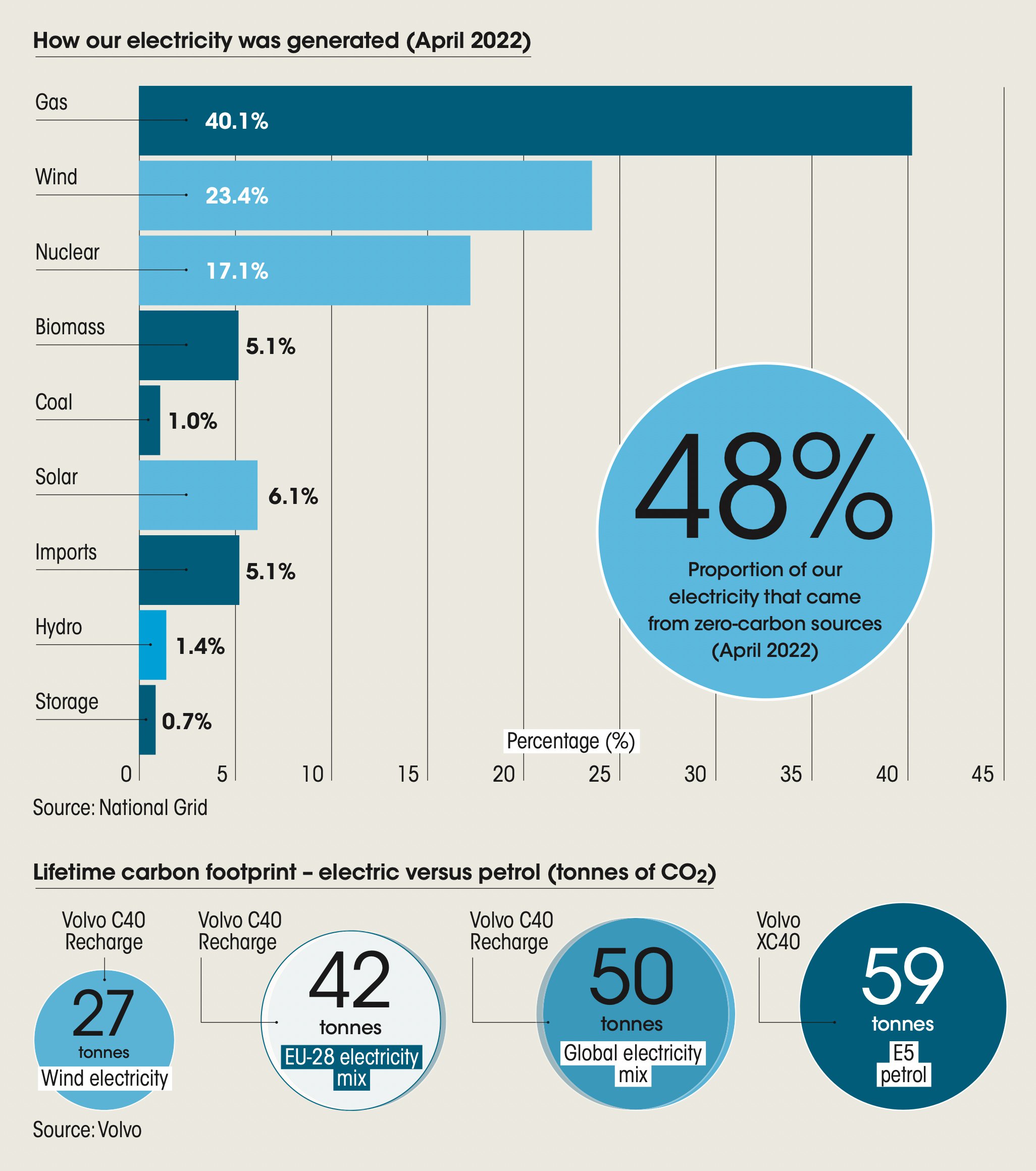 But what about the battery?

“With EVs being relatively new to our roads, the batteries we usually see are ones that are from crash-damaged cars, and they are then purchased by specialists who know exactly what they’re doing with them,” says Joslin.

Matt Cleevely, who runs EV and battery specialist Cleevely EV, says batteries are very easy to repair and eventually easy to recycle. “We’ve seen a Mitsubishi Outlander PHEV [plug-in hybrid] with a punctured battery casing,” he says. “That didn’t damage any of the cells, but it did allow moisture within the battery – and the battery gave an insulation fault. We repaired the puncture wound, sealed it up, dried out the pack and got the vehicle back on the road.

“We also had a brand new Volkswagen ID.3 that was crashed in transport. It had a pyrotechnic fuse on board that went off, ensuring that all the electrical energy was retained within the battery pack and couldn’t escape. So all we had to do was replace that pyrotechnic fuse. 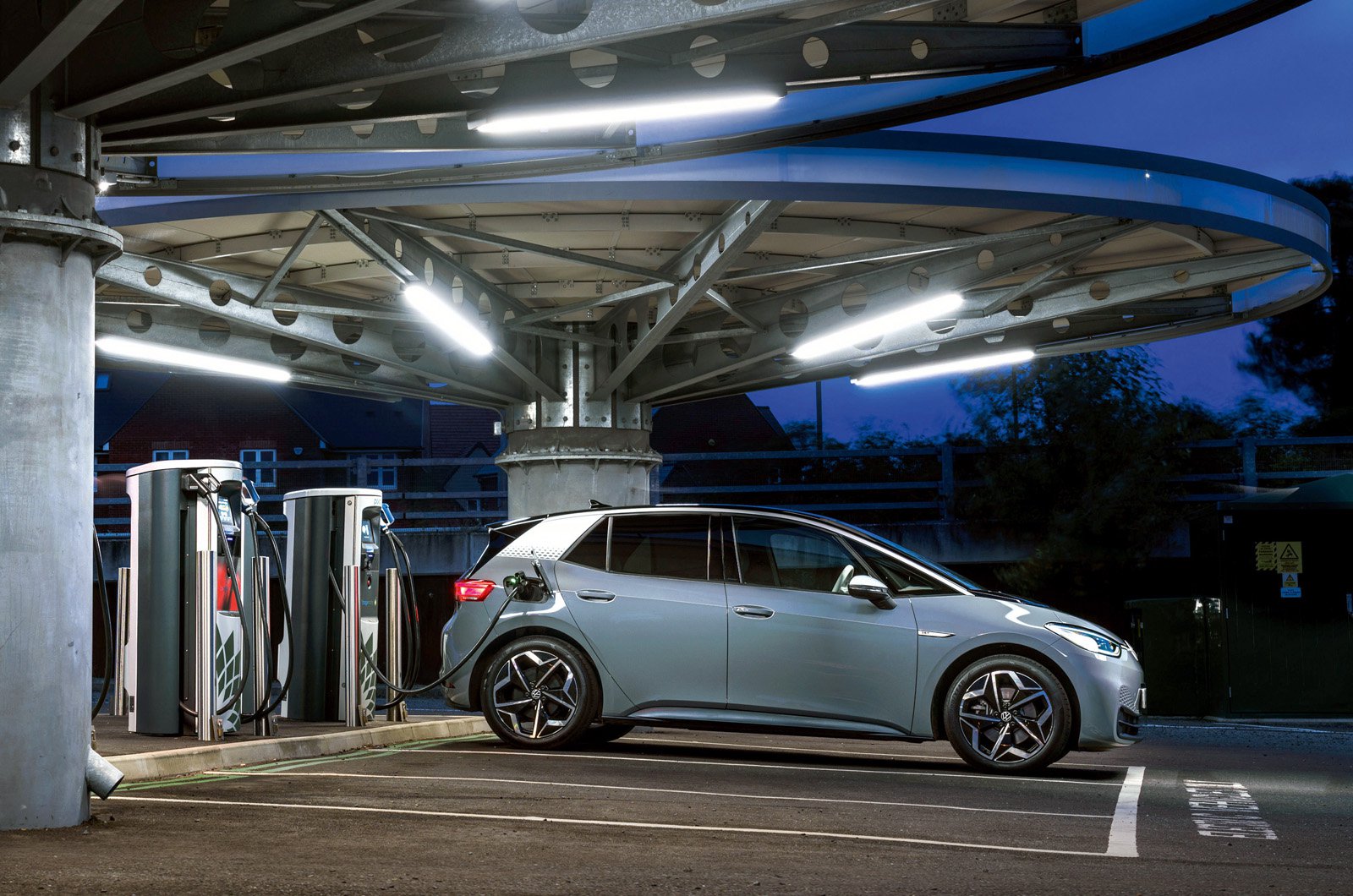 “We’ve even repaired batteries that have had internal individual cell failures. But that doesn’t end the life of the battery either. The cells are simply repaired and put back in.”

How long does a battery typically last?

“The degraded batteries that we see are from the first-generation Nissan Leaf and are 10 years old. The worst I’ve seen has degraded to a 50% state of health,” says Cleevely. That means there’s around 12kWh of usable battery storage left within a 24kWh battery – about enough to run a house for an evening.

If a battery is maintained properly, Cleevely says EVs can make great high-mileage vehicles. “We’ve seen a Tesla Model S that gets used as a taxi, and it’s a great car for that purpose because of the huge saving in fuel costs,” he says. “There are also fewer moving parts in an EV than in a combustion-engined vehicle, and there’s less servicing to be done. They are generally very reliable.” 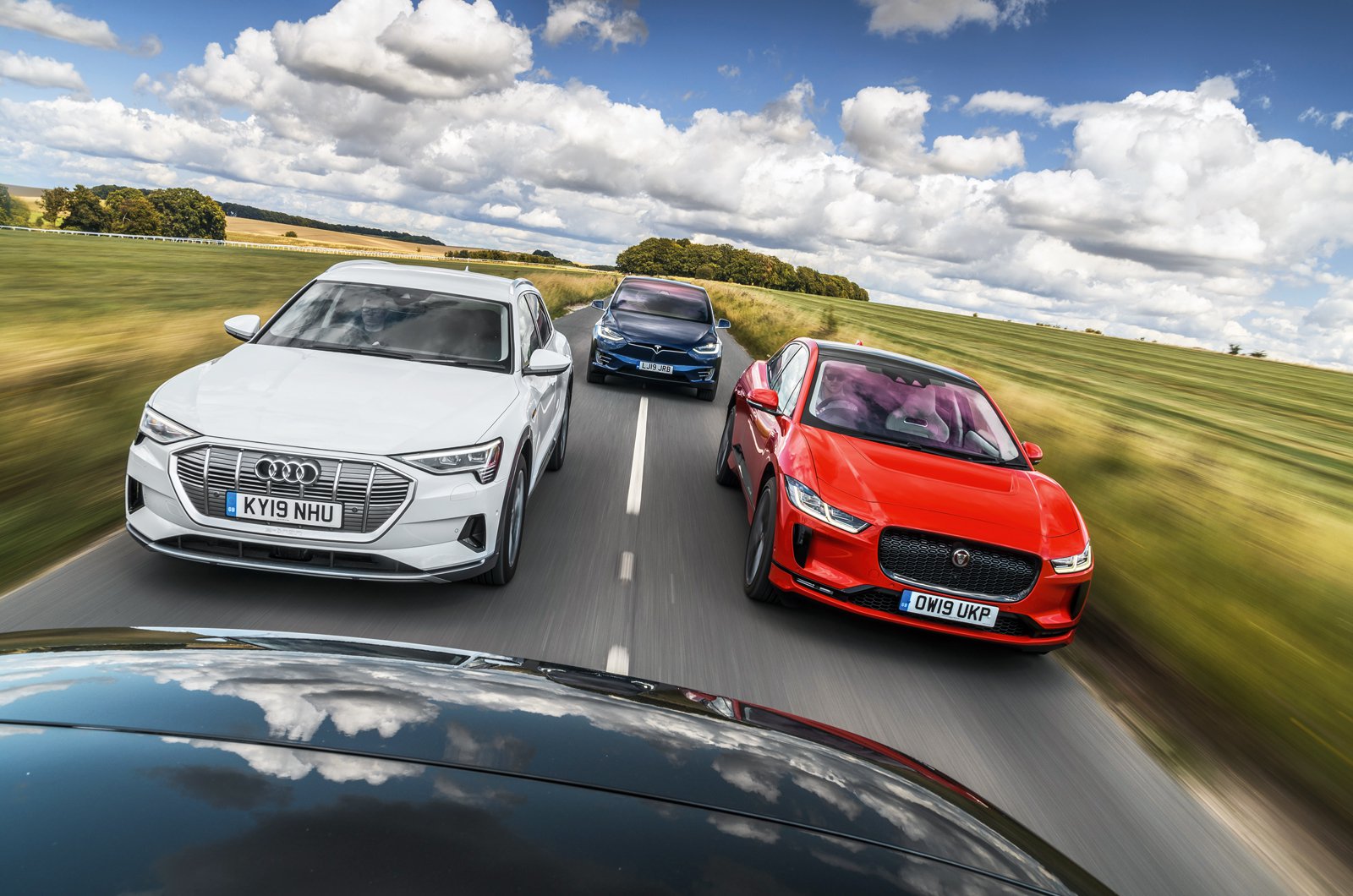 What happens to old batteries?

“An old battery will always have some life left, albeit degraded,” says Cleevely. “In most instances, old batteries get recycled and used for domestic solar energy storage, and there’s a huge demand for that. By no means at the moment do any used EV batteries go anywhere near landfills.”

What are car manufacturers doing?

Following the launch of the original Leaf, Nissan partnered with Sumitomo Corp to set up 4R Energy, which was created to develop solutions for end-of-life batteries.

Applications where these batteries have been reused include powering aircraft at airport gates, powering forklifts in warehouses and for home and commercial energy storage. Nissan also uses them to power automated guided vehicles that deliver parts in its factories. 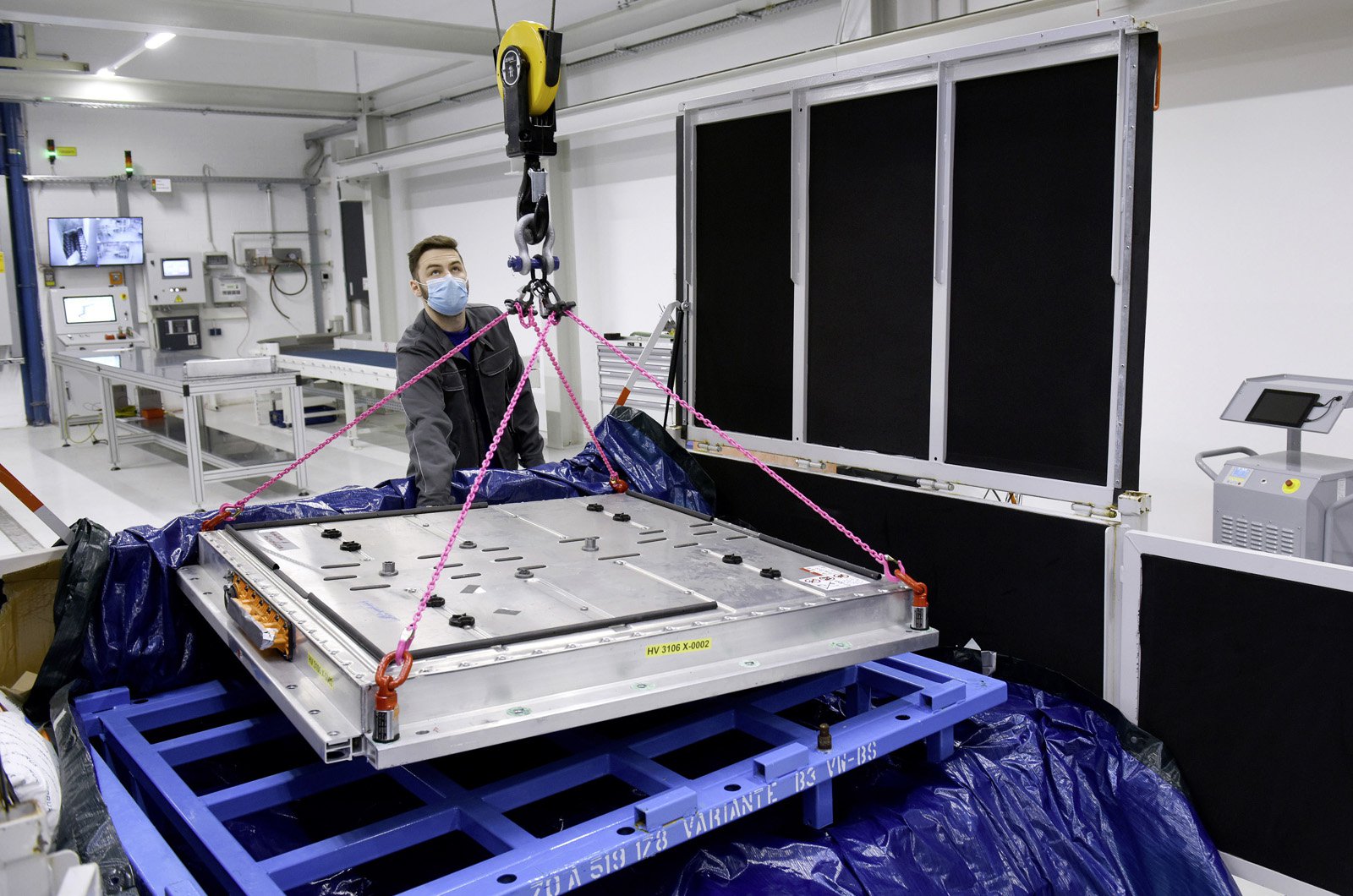 Nissan, along with other car makers such as Tesla and Volkswagen, have in-house facilities for recycling batteries at the end of their usable lives. Others, such as Renault, recycle their batteries through partnerships with waste management and chemical firms. Tesla says 100% of its batteries get recycled.

On the whole, EVs do what they say on the tin, and there’s little reason to feel guilty about the environmental impact when buying a new one.

However, it’s important to remember that we’re only in the early stages of the modern EV era, and there are areas in which progress can still be made to make them more sustainable.