More for you |
What Car?'s top 10 used electric cars (and the one to avoid)10 most unreliable SUVsWhat Car?'s best cars for less than £250 per monthGuaranteed discounts on our 2020 Award winners - save up to £19,366Skoda Kamiq long-term test review
Home
News
How to deal with car salesmen: part 1
news

How to deal with car salesmen: part 1

* Don't believe everything you're told * Don't be pushed into a decision * Take your time and shop around... 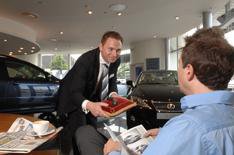 What Car? Target Price mystery shoppers experience the full range of tactics that sales staff use to get the most cash out of car buyers.

Learn how to spot these tactics and you'll know how to deal with them when they're used against you, whichever brand of car you're shopping for.

Tactic one 'Sorry, we can't discount that car.'
This is, almost certainly, complete rubbish. The majority of cars on sale are available with a discount. The exceptions are models available in limited numbers, such as a Ferrari 458, where demand will always outstrip supply.

Recently launched cars where demand is buoyant will also miss out on the biggest discounts.

So, you're unlikely get a discount on a new Ferrari, but how about a Peugeot RCZ?

We were told by one Peugeot dealer that: 'Unfortunately Peugeot have said that anyone who discounts the RCZ will have the rights of selling the car taken away from them.'

Peugeot denies they have threatened dealers with any such action, admitting it's just a case of 'salesmanship' in action.

However, a spokesman for Peugeot said: 'There has been so much demand that the RCZ doesn't attract the same kind of incentives that other Peugeot products enjoy.

'There would be no point in discounting the car and we have communicated that to dealers.'

Competition laws exist to ensure that Peugeot, or any other importer, can't dictate to franchised dealers the price at which cars are sold. That's why when you look in a pricelist it says 'recommended retail price,' not compulsory retail price.

If you're told by a dealer they can't discount, for any reason, be suspicious. Consult our Target Prices to see the most you should pay for any new car and don't take no for an answer.

You should be able to find a dealer or broker that will discount more than our Target Price, but get in touch with us if you can't and we'll put you in touch with one that will.

As far as discounts on an RCZ goes, take a look at the hundreds that Drivethedeal.com is offering off prices.

Don't expect a big discount on newly lauched cars such as the Peugeot RCZTactic two 'You have to buy now to get this price.'
This can be true, but more often than not it is just used to seal the deal by panicking buyers into signing on the dotted line.

Take time to satisfy yourself you're happy with the deal and don't be pressurised. Go for a breath of fresh air away from the pressure-cooker atmosphere of the dealership, so you can look over the details with a cool head.

The same Peugeot dealer that told us they couldn't discount the RCZ told us we needed to order now to avoid the increase in next January's VAT increase.

Even if a car you order now isn't delivered or paid for in full until next year, a dealership can raise a tax 'point of sale' this year, when you place a deposit, which means VAT will be applied at the current rate, not the increased level of 20%.