M4 to become a 'hydrogen highway' 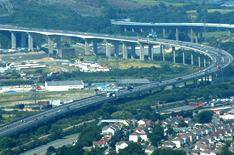 It's hoped this will help overcome the main obstacle in the way of hydrogen cars the lack of a fuelling infrastructure by creating a low-carbon fuel corridor along the South Wales section of the M4. There are also plans to extend the 'corridor' east as far as London.

'Hydrogen presents exciting opportunities for low-carbon energy and I want South Wales to become a UK centre of excellence and expertise in hydrogen fuel technologies both in development and manufacturing,' said Peter Hain.

Wales is the latest region to be designated a Low Carbon Economic Area (LCEA) with emphasis on the development of hydrogen and low-carbon fuel technologies. The West Midlands has also been designated as such.

• The University of Glamorgan is to receive funding worth 6.3 million for a project called CymruH2Wales for research into hydrogen production and usage, it was announced today.