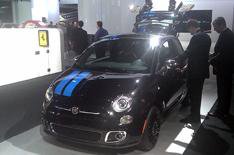 For those who don't know, Mopar is short for Motor Parts and, among other things, it produces aftermarket accessories and performance versions of Chrysler products.

Now that Fiat part-owns Chrysler, and is using its dealer network to launch the Fiat 500 in the USA later this year, the Mopar tuners have had a go at the supermini.

The result is this the Mopar Fiat 500. Its at the Detroit motor show finished in black satin paintwork with a blue stripe decal running across its bonnet and roof, plus an overload of chrome, including touches on the exhaust, door mirrors and grilles.

Inside, changes include a faux carbonfibre handbrake and gearlever, and black and blue leather seats.

Performance-enhancing modifications include the addition of a suspension strut brace, to improve stiffness.

The car is intended to showcase what Mopar can do rather than as a bespoke special edition, so expect a raft of add-ons to be offered for the Fiat 500 in future.